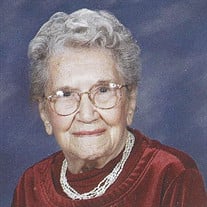 Marion E. DesForge (nee Yarnall) age 97, of Menomonie, WI passed away Sunday, October 12, 2014 at the American Lutheran Home in Menomonie. She was born September 4, 1917 in Pleasant Valley Township, Trempealeau Co. WI to Joseph and Maggie (Gibson) Yarnall. She grew up in Waupun, WI then moved to Eau Claire in 1934 and graduated from Eau Claire Memorial in 1935. Marion married Robert “Bob” Alf in 1935 and they lived in the Elk Mound area and raised four children. Marion attended St. John’s Lutheran Church in Eau Claire and later transferred to Peace Lutheran Church in Menomonie. After Bob’s death she later married Kenneth DesForge. Marion enjoyed music and played the piano, cello and trombone. When in high school she played cello in the orchestra and first chair trombone in the band. While attending Memorial High School she was selected to play in the Wisconsin State Band that competed in national competition where she played under the direction of John Phillip Sousa. She especially enjoyed the Ludington Guard Band concerts in Menomonie. Marion liked to travel and see new places and visit friends and family and she liked fishing with friends and family. She also loved knitting and crocheting afghans and taking care of her flowers and cheering on the Green Bay Packers. She retired from the USPS after many years and had previously owned and operated Mound Nursery where she would knit a stocking for every child whose parents bought a Christmas tree. Marion is survived by her four children: Roberta Jean Leff (Gerald) of Menomonie WI, Marge Hotter of Menomonie WI, James “Tim” Alf (Jean) of Lebanon IL, and Sharon Kliethermes (Rich) of Rolla MO. She is also survived by eight grandchildren, sixteen great-grandchildren, six great-great-grandchildren, stepsons, John, Steve, Jim and Larry DesForge, eight step-grandchildren. two sisters and one brother, Florence “Peggy” Jeziorske (Ben) of Osseo WI, Russell Yarnall (Helen) of Alberton MT, and Ruby Radke of Monroe WI, and many nieces, nephews, other relatives and friends. She was preceded in death by her parents Joseph and Maggie Yarnall, four brothers, Fredrick, Richard, Ernest and Lawrence; three sisters, Jessie Isom, Alice Hedlund and Margaret Pilgrim; and her husbands, Bob Alf and Kenneth DesForge. Funeral services will be held at12:00 (noon) Friday, Oct. 17, 2014 Peace Lutheran Church in Menomonie with Pastor Kristine Stedje officiating. There will be visitation from 4:00 to 7:00 p.m. Thursday at Olson Funeral Home in Menomonie and at the church one hour prior to the service on Friday. Burial will be in Waneka Cemetery in the Town of Spring Brook, Dunn Co. WI. The family suggests memorials to Peace Lutheran Church, Stepping Stones or charity of donor’s choice.

The family of Marion E. DesForge created this Life Tributes page to make it easy to share your memories.