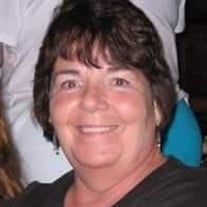 Marilyn M. Understock, age 63, of Menomonie, passed away Friday, December 16, 2016 at Glenhaven Nursing Home in Glenwood City with her family by her side. Marilyn Marie Lester was born August 12, 1953 in Menomonie to Robert and Frances (Krueger) Lester. She moved to Orange, CA and grew up there until moving back to Wisconsin in 1970. She graduated from Colfax High School in 1971. Marilyn married Ronald Understock in 1975 in Iowa. They had two daughters, Katie and Holly. They later divorced. Marilyn worked as a CNA at Pioneer Nursing Home in Prairie Farm for many years. During this time, she went back to school and obtained her RN degree in 1989. She began working at Myrtle Werth Hospital in Menomonie and continued working there until her health declined, forcing her to retire in 2013. Marilyn enjoyed hot weather, working outside, trips to the casino, wine, chocolate and spending time with family and friends. Her grandson Braxton was the best medicine for her. Marilyn is survived by her two daughters, Katie (Doug) Parker of Boyceville and Holly Understock of Minneapolis, MN; her grandson, Braxton of Boyceville; brothers, Dave (Denise) Lester of Eleva and Gary (Kim) Lester of Orange Park, FL; brothers and sisters-in-law, Terry (Lynn ) Understock of Sioux Falls, SD, Jim (Deb) Understock of Custer, SD and Sally (Dave) Neeb of Custer, SD; she is further survived by aunts, uncles nieces, nephews and many friends. She was preceded in death by her parents Robert (2016) and Frances (2007), father-in-law and mother-in-law Merle & Annabel Understock, a cousin Jerry Wolf, her grandparents, aunts and uncles. Marilyn’s family wishes to thank Dr. Carrie Nelson and the nurses and staff Mayo Clinic Health System-Red Cedar and Glenhaven Nursing Home for the great care they provided to Marilyn over the years. “Mom fought a tough battle and never complained about the unfair hand she was dealt.” A gathering in her memory will be held from 4:00 p.m. to 7:00 p.m. Tuesday, December 20, 2016 at Olson Funeral Home in Menomonie

Marilyn M. Understock, age 63, of Menomonie, passed away Friday, December 16, 2016 at Glenhaven Nursing Home in Glenwood City with her family by her side. Marilyn Marie Lester was born August 12, 1953 in Menomonie to Robert and Frances (Krueger)... View Obituary & Service Information

The family of Marilyn M. Understock created this Life Tributes page to make it easy to share your memories.