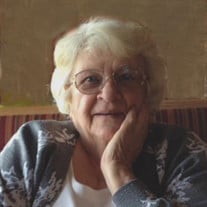 Marilyn Tritt, age 85, of Elk Mound, passed away peacefully at Autumn Village on Friday, November 20, 2015. Marilyn was born September 18, 1930 in Pine River, Wisconsin, to Rudolph and Esther Jensen. She married Lowell “Max” Tritt on July 25, 1947 at the age of sixteen, started her family at seventeen and was married to Max for 58 years. Her lifetime occupations included waitressing at her mother’s restaurant and helping Max with the management and operation of their “Triple T” egg processing and delivery business. Her favorite endeavor was being a mother to her four children. During her lifetime, Marilyn enjoyed archery, golf, bowling, country music festivals, sewing and cooking. She especially enjoyed being a mother, grandmother and great grandmother to her four children, seven grandchildren and three great grandchildren. Due to her love for her family, she became an avid fan and supporter of youth hockey, soccer, baseball, football, girl’s basketball and gymnastics, swimming, dance and music recitals. Her cheering, encouragement and enthusiasm for her grandchildren and great grandchildren could always be heard above all the other spectators. Marilyn is survived by her three sons, Jack (Vicki) Tritt of Menomonie, Jayson (Jeani) Tritt of Hudson, Jeffrey (Christine) Tritt of Seattle, Wash.; one daughter, Michelle (David) Petersen of Chippewa Falls; seven grandchildren, Christopher, Cory, Kimberly (Justin Seidel), Max, Sam, Devan, and Taylor; 3 great grandchildren Connor, Maari and Sonya: a sister in-law, Sonya Fraleigh of Omro, good friend Betty Schlough of Menomonie and other relatives and friends. Marilyn was preceded in death by her husband Max, her mother Esther, her father Rudolph, her step-father Louis Seibold, and a brother-in-law Jack Fraleigh. At Marilyn’s request, a private family memorial service was held on November 22, 2015 at which time she left her family with the words: “Life’s most valued treasures are the treasures that are free. For it isn’t what we own or buy that signify our wealth. It’s the special gifts that have no price: Our family, friends and health.” Olson Funeral Home of Menomonie is serving the family.

The family of Marilyn E. Tritt created this Life Tributes page to make it easy to share your memories.

Marilyn Tritt, age 85, of Elk Mound, passed away peacefully at...