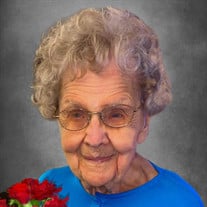 Margaret Elaine Snyder, age 100, of Menomonie, WI passed away Sunday, June 19, 2022, at the American Lutheran Home in Menomonie. Margaret was born Jan. 3, 1922, to Violet VanPool and at three months of age adopted by Albert and Olive Larsen. She lived in Knapp on a farm as a small child and was raised in the surrounding area. On Dec. 26, 1940, Margaret married Harold Snyder. They moved to Menomonie when Margaret was expecting the first of their five children. Margaret was alone as so many were with Harold going off to World War II. In 1949 the family moved to Amery where Margaret ran the Glidden Paint Store they had purchased, and Harold taught school. They returned to Menomonie for a few years before moving to the Twin Cities where Margaret worked at Central Medical. They then moved to Rice Lake where they lived for 30 years. Margaret worked at the Clinic in Rice Lake until she had to stay home to take care of her mother. Margaret enjoyed so many things, including crafts and square dancing. She loved knitting dish cloths and before her eyesight failed, she had made and given away over 600 of them. Margaret is survived by her children, Sharon Rassbach of Menomonie, John (Carol) Snyder of Minnetonka, MN, James Snyder of Menomonie, and Ann Snyder of Menomonie; nine grandchildren; and 15 great-grandchildren; other relatives and friends. She was preceded in death by her parents; her husband Harold; a daughter Mary Margaret; a granddaughter Lisa Marie; three grandsons Matthew, Joshua, and Adam; and son-in-law Larry Rassbach. Funeral services will be held at 10:00 a.m. Saturday, June 25, 2022, at Immanuel Baptist Church in Menomonie, WI with Pastor Michael VanZee officiating. There will be a visitation at the church one hour prior to the service. Burial will be in Orchard Beach Cemetery in Rice Lake, WI.

The family of Margaret E. Snyder created this Life Tributes page to make it easy to share your memories.