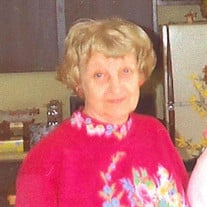 Margaret Mae Harms, entered into eternal rest, October 21, 2016 at her home in Boyceville, WI. She was born March 25, 1927 in Reinbeck, Iowa to William and Lillie (Claussen) Guelner. Margaret graduated from Reinbeck High School in 1944. Following high school she worked 1 year at Viking Pump Company in Cedar Falls, Iowa as a secretary and 1 year at Rath Packing Company in Waterloo, Iowa. Margaret was united in marriage to Delvin Harms, January 11, 1947. They lived in Reinbeck until 1956 when they moved to their farm in the country. They remained there for 20 years before returning to Reinbeck in 1976. She later moved to Wisconsin to be closer to her family. Margaret was a member of the Union Congregational United Church of Christ. She enjoyed crocheting and playing cards. Margaret is survived by her 2 sons Dan (Barb) Harms and Roger (Judy Clark) Harms, a twin sister Marlys Johannsen, grandchildren Brian Harms, Stephanie Voelker, Kelly Steffens, Kassie Kotter, Kristi Sherman, Kourtney Christenson, Jedd Harms, Jake Heyer; step grandchildren Matt Appel, Mark Appel, Jason Appel, Justin Appel, Lori Sinz and Lance Lorenz and many great grandchildren, nieces & nephews. She was preceded in death by her parents; her husband Delvin; her brother Melvin Guelner; sister Marian Davidson; sons Greg & Kendall; and grandson Clayton. The family would like to thank Darcy & Jason Boda - Above & Beyond Adult Family Home, for their kindness and care for Margaret and making her part of their family since 2012. Memorial Services will be held at 2:00 p.m. Saturday, October 29, 2016 at Union Congregational United Church of Christ in Reinbeck, Iowa. Burial will be at Reinbeck Cemetery. Visitation will be one hour prior to the services.

The family of Margaret M. Harms created this Life Tributes page to make it easy to share your memories.