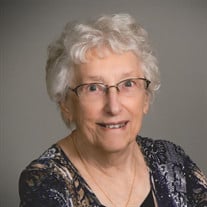 Margaret R. (Miller) Bartlett, age 91, of Menomonie, WI passed away at home on Tuesday, Sept. 1, 2020. She was born Jan. 11, 1929, in Medford, WI to William F. and Margaret (Tappe) Miller. She was baptized and confirmed at Immanuel Lutheran. She graduated from Medford High School in 1947, and entered college in Eau Claire, WI. She graduated with a degree in elementary education. Margaret taught first grade in Barron and Ladysmith. Margaret met her husband to be, Charles Bartlett, while in Barron, and they were married June 16, 1951. To this union four children were born, David, Mary and twins, Daniel and Donald. They lived in Barron about four years before moving to Medford, where Charles managed a lumber company for many years. In 1965 they moved to Boyceville, where Charles bought a feed and grain mill. Marge hadn’t taught while raising her family, but when they were all in school, she began teaching first or second grade as needed in Boyceville for 22 years. She was a very active member of St. John’s Lutheran Church in Boyceville, serving as Sunday School teacher, headed the Altar Guild, and sang in the choir. She was active in the Ambulance Service, Community Club, and Snowmobile Club. She was on the Teachers Advisory Board at River Falls College. Margaret was a skier, ice skater, and curled for many years in Medford. She was also a knitter, and avid reader. In 1989, Marge and Chuck retired and moved to Cherokee Village, AR, for many happy years living on a golf course, where they enjoyed playing most days. Margaret was also very active in her church, Peace Lutheran, where she headed the Altar Guild many years, was LWML president several times and was on the Preschool Board. In addition, she served on the Fountain Place Board, an independent living facility, much like the Oaks in Menomonie, where she moved to when she moved back to WI, to be near her children. While in Cherokee she also played a lot of Bridge, which she continued to do in Menomonie. While living in the Ozarks, they continued to spend most of their summers at their cabin near Iron River. Margaret is survived by her children, David (Barbara) Bartlett, Mary (David) Score of Boyceville, Daniel (Gina) Bartlett of Superior, Donald (Valerie) Bartlett of Duluth, MN; 15 grandchildren; 26 great-grandchildren; brothers, Fred Miller and Jim (Charlotte) Miller of Medford; and a sister Mary Holzhausen of Banger, WI; and many nieces and nephews. She was preceded in death by her parents; her husband; sister-in-law Ann Miller; and brother-in-law Bud Holzhausen. Private services will be held with burial at Wayside Cemetery in Barron, WI.

Margaret R. (Miller) Bartlett, age 91, of Menomonie, WI passed away at home on Tuesday, Sept. 1, 2020. She was born Jan. 11, 1929, in Medford, WI to William F. and Margaret (Tappe) Miller. She was baptized and confirmed at Immanuel Lutheran.... View Obituary & Service Information

The family of Margaret R. Bartlett created this Life Tributes page to make it easy to share your memories.