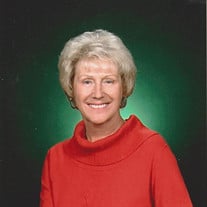 Marcia M. Oas, 73, of Menomonie passed away at her home in Menomonie, WI, on August 16, 2017 surrounded by family and friends after a long and courageous battle with cancer. She was born on October 27, 1943, to Leonard and Lillian (Draeger) Buckley in Menomonie. She attended Blanchard Grade School in the town of Sherman and graduated in 1961 from Menomonie High School. After graduation Marcia worked at Sanna Dairies, Inc. for 5 years. On December 12, 1964, she married David L. Oas at Peace Lutheran Church in Menomonie. After they married they moved to Hayward, Wisconsin where Marcia worked for Attorney Thomas Duffey. Before returning to Menomonie in 1969, they also lived in Dorchester, and Spooner, WI. Marcia worked for Wisco Frozen Foods in Menomonie for 14 years with her good friends Karen Retzloff and Mike Harmston. In 1987, she started work at UW Stout in the Continuing Education Office, and remained there until her retirement in 2007. Marcia was an active member of Peace Lutheran Church, and was involved in helping fundraising events for Hospice, Special Olympics, and the Humane Society. In addition to these activities, she enjoyed her family, friends, golfing, traveling, and also watching the Brewers, Packers and Badgers. Marica is preceded in death by her parents Leonard and Lillian, husband David, brother Thomas Buckley and special friend Becky Harmon. Marcia is survived by daughter, Cheryl (Brandon) Uffelman of La Crescent, MN; son, Jeffery (Toni) Oas, of Menomonie, WI; four grandchildren, Berklee Oas of La Crosse, WI, David ‘D.J.’ Oas of Menomonie, WI, Brady and Logan Uffelman of La Crescent, MN; Aunt Fran Delia of South St Paul, MN; Aunt Mary Buckley of Menomonie, WI; Uncle John Trainor of Menomonie, WI; cousins, nieces, nephews, and many other relatives and friends as well as her granddogs: Onyx, Chief, Gunner and grand pig Jeremy. In Lieu of flowers memorials may be given to Hospice, Peace Lutheran Church or the Dunn County Humane Society in her memory. A Celebration of Marcia’s life will be held at 1:00 p.m. Sunday, Aug. 20, 2017 at Peace Lutheran Church in Menomonie, with Pastor Bob Friese officiating. There will be visitation from 11:30 a.m. Sunday, until the time of the service at the church. Private burial will be held at a later date. Marcia will be remembered for being a wonderful mom, grandma and friend to many. She was loved by so many and we were blessed to have her in our lives. Many friends said that when Marcia came into the room, she brought sunshine with her. She was fun to be around and kind to anyone she met. She will be missed.

Marcia M. Oas, 73, of Menomonie passed away at her home in Menomonie, WI, on August 16, 2017 surrounded by family and friends after a long and courageous battle with cancer. She was born on October 27, 1943, to Leonard and Lillian (Draeger)... View Obituary & Service Information

The family of Marcia M. Oas created this Life Tributes page to make it easy to share your memories.

Marcia M. Oas, 73, of Menomonie passed away at her home in Menomonie,...