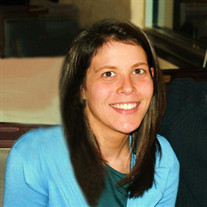 Mackenzie Rae Smith, beloved daughter of Stephen Smith and Cynthia Russell Smith and sister to Andrew (Drew), passed away after a short illness on October 17 at her home in Platteville. Mackenzie was born in Green Bay on March 4, 1988. She graduated from Pulaski High School in 2006. There she excelled in tennis, playing Number 1 in both doubles and singles. She played French horn in the Pulaski HS band, marching with them in the Macy’s Thanksgiving Day Parade in New York City. She loved visiting her Aunt Linda and cousin Hallie in New York and was thrilled by the culture and arts of city life. While in high school, she was part of a student writing team for the Green Bay Press Gazette; serving as film and music critic and writing topical articles. She was passionate about writing and had dreams of becoming a published author. She attended University of Wisconsin-Madison, studying psychology, and she worked as an In-Home Line Therapist for autistic children. Mackenzie was bright, insightful, sensitive, and compassionate. She had a wry sense of humor and an irreverent spirit; her conversations were often laced with references to Seinfeld and The Daily Show episodes. Mackenzie loved nature, delighting in sand hill cranes and eagles, and connected with every animal she met. She often spoke fondly of her childhood: spending time with her Grandma and Grandpa Russell at the family home on Lake Tainter and with her Grandma Smith in Washburn on the shores of Lake Superior, as well as time spent with her brother Drew, whom she adored. She had a deep and abiding love for her family. Mackenzie is preceded in death by her grandparents John and Lou Russell and Bruce and Corinne Smith, cousin Brian Celmer, and uncle Paul Stotler. Besides her parents and brother, Drew, she is survived by aunts, uncles and cousins: Janet Celmer of Washburn; Sarah and Brad Erickson and Ben and Bruce Erickson of Alabama; Jeffrey and Linda Russell of Madison; Steve Russell and Kobi Shaw and their children Tate and Quinn of Colfax; and Linda Russell and Hallie Stotler of New York. She will be dearly missed by her family, friends, her partner Jason, and by Roscoe, her cherished dog and constant companion. Her beautiful soul lives on in all of us. The family wishes to thank St. Anne’s Episcopal Church, especially Rev. Eric Mills and Bobbie Moon, and Olson’s Funeral Home in Menomonie, Wisconsin. In particular, the family expresses sincere appreciation to dear friends and loved ones – for the outpouring of kindness, love and support. In lieu of flowers, a memorial fund is being established in Mackenzie’s name. There will be a graveside service on Tuesday, October 23rd, 1:00pm at Cedar Falls Cemetery near Menomonie, Wisconsin, where she will forever rest with her beloved maternal grandparents, Lou and John Russell. On Friday, October 26th, there will be a memorial service at St. Anne’s Episcopal Church (347 Libal Street, DePere, WI) at 4:00 pm, followed by a reception. To share a memory, please visit obituaries at www.olsonfuneral.com

Mackenzie Rae Smith, beloved daughter of Stephen Smith and Cynthia Russell Smith and sister to Andrew (Drew), passed away after a short illness on October 17 at her home in Platteville. Mackenzie was born in Green Bay on March 4, 1988. She... View Obituary & Service Information

The family of Mackenzie Rae Smith created this Life Tributes page to make it easy to share your memories.