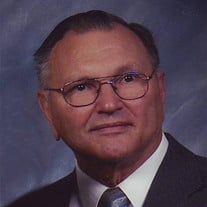 Lyle M. Kruschke, age 80, of Menomonie, WI passed away peacefully Thursday, January 14, 2016 at The Neighbors of Dunn County. He was born September 7, 1935 in Eau Claire, WI to William and Rosie (nee Whitcomb) Kruschke. He grew up in Eau Claire and graduated from Eau Claire Senior High School and later from the University of Wisconsin-River Falls. He served his country in the Army during the 1950s and was honorably discharged. He had a 33 ½ year career at 3M in Maplewood, MN and retired in 1992. Lyle married Betty Bell in 1955 at St. John’s Lutheran Church in Eau Claire. Their marriage was blessed with six children with the marriage ending in divorce. He later married Edna (Kitty) Keith ending with her death in 1973. He married Lavonne Page in 1975 and they enjoyed a 26 year marriage ending in her passing in 2001. He married Phyllis Wilber October 4, 2003. He was known by many as “Skip” or “Skipper”, a name given to him as a toddler by his paternal grandfather. Skip enjoyed camping at the annual family reunion and cajoling with the men at deer hunting camp. Lyle and Phyllis delighted in many summer concerts in the park, especially when a pie social was included. He enjoyed woodworking and created many projects for friends and family. Many people knew him through his various volunteer activities and would agree that he was generous with his time and talents, always more comfortable helping others. Lyle will remain in the hearts of his wife, Phyllis of Menomonie, children Howard (Doreen) Kruschke of Roberts, WI, Barbara Kruschke (wife of David) of Bensenville, IL, Cynthia Anderson of Hudson, WI, Rose Wick of Hudson, WI, Karl (Darla) Kruschke of Osceola, WI, and Stephen (Julie) Kruschke of Amery, WI; stepchildren, Vickie Stockcamp of Riverside, CA, Stephen Page of Crookston, MN, Nancy (Kevin) Grabau of Hudson, WI, Patsy Peltier of Stillwater, MN, Sherry (Rick) Hinz of New Richmond, WI; Allen (Nancy) Borth of Port Byron, IL, Peggy (Steve) Lynum of Woodville, WI, Susan Borth Nelson of Spring Valley, WI, Lyall (Cindy) Borth of Woodville, WI, and Judy (Mike) Kietzer of Menomonie, WI. He is survived by his two younger brothers Harold Kruschke of Strum, WI and Raymond (Yvonne) Kruschke of Pelican Lake, WI. He is also survived by 38 grandchildren, many great grandchildren, nieces, nephews, and other relatives and friends. He was preceded in death by his parents, William and Rosie Kruschke, wives Kitty and Lavonne, son David Kruschke, grandson Terry Anderson, and sister-in-law Patricia Kruschke. The family would like to extend their deepest appreciation to the staff at The Neighbors of Dunn County for their loving care and support. A celebration of life will be held at 3:00 PM Saturday, January 30, 2016 at the Olson Funeral Home in Menomonie with Pastor Brett Voigt officiating. Military Honors will be conducted by Menomonie Veterans Honor Guard. Family and friends are welcome two hours prior to the service. A luncheon will immediately follow the service at the Veterans Center of Menomonie, E4710 County Road BB north of Menomonie, off Hwy. 25. Memorial and cremation services are entrusted to the Olson Funeral Home (715) 235-2154. In lieu of flowers, memorial contributions to the American Diabetes Association are appreciated.

Lyle M. Kruschke, age 80, of Menomonie, WI passed away peacefully Thursday, January 14, 2016 at The Neighbors of Dunn County. He was born September 7, 1935 in Eau Claire, WI to William and Rosie (nee Whitcomb) Kruschke. He grew up in Eau Claire... View Obituary & Service Information

The family of Lyle M. Kruschke created this Life Tributes page to make it easy to share your memories.