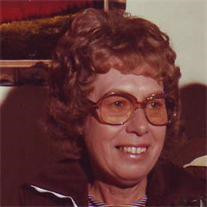 Luella Irene (Schultz) Bodsberg, age 94 of Boyceville passed away peacefully at her home on Monday, September 15, 2014 with family by her side. She was born July 17, 1920 in Stanton township of Dunn county, Knapp Wisconsin to Fred W. and Gladys (Neyer) Schultz. She was baptized and confirmed in the Lutheran faith at St Paul's Evangelical Lutheran Church in Menomonie Wisconsin. Luella attended Peck school until eighth grade. As a young lady Luella enjoyed playing the guitar and accordion at various school functions. She also worked as a waitress in Wilson and South Milwaukee. At one point she traveled out west and worked on vegetable farms. She was united in marriage to Robert C. Bodsberg on May 2, 1944 in Abilene, Texas while Bob was serving in the military. Their marriage was blessed with two children, Robert M. and Marilyn. In 1952 Bob, Luella, and their two children moved to their farm north of Boyceville. In addition, to her role as a farm wife she also worked outside the home at Presto in Eau Claire and Swiss Miss in Menomonie. After she retired from the workforce, she continued to farm. In her free time she enjoyed going to her cabin in Luck, Wisconsin to fish. She loved fishing and hunting but her greatest joy came from spending time with her grandchildren and great grandchildren. Luella was preceded in death by her husband Robert, her parents, one infant brother, sister Delores Hurtgen, brother-in-law Ervin Hurtgen, daughter-in-law Sandra (Hybben) Bodsberg, and a nephew. She was also preceded by her husband's parents Jens & Josephine, brother-in-laws Curtis & Ernie Bodsberg, sister-in-law Cora Thompson. She leaves to mourn her son Robert, daughter Marilyn (Rondell) Hybben, one brother Murrell (Donna) Schultz, six grandchildren and their spouses, Jeff (Trisha), Robbie (Shelly), Jamie (Leslie), Rocky (Alison Bertagnoli), Tracy (Eric) Franseen, Rondell S. (Erika) Hybben, 12 great grandchildren, Aaron, Michael, Cansis, Krista, Cameron, Robert, Riley, Rhea Bodsberg, Kyle & Kysa Franseen, Kari & Rondell J. Hybben, sister-in-law Betty Jordahl, She is also survived by nieces, nephews, cousins, and friends. Visitation will be from 5:00 – 7:00 pm Friday, September 19, 2014 at the Olson Funeral Home in Menomonie. Family will gather at the river on the Bodsberg farm in a private celebration on Saturday, September 20 to honor Luella's life. Burial will be in the Teegarden Cemetery, Lucas Township, Dunn County.

Luella Irene (Schultz) Bodsberg, age 94 of Boyceville passed away peacefully at her home on Monday, September 15, 2014 with family by her side. She was born July 17, 1920 in Stanton township of Dunn county, Knapp Wisconsin to Fred W. and Gladys... View Obituary & Service Information

The family of Luella Bodsberg Obituary created this Life Tributes page to make it easy to share your memories.