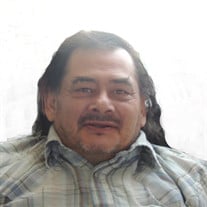 Loyd B. Lemon, age 64, of Menomonie, WI formerly of Boyceville, WI passed away Thursday, Sept. 27, 2018 at Mayo Health System – Menomonie. He was born April 26, 1954, in rural Menomonie, WI to Ernest and Fern (House) Lemon and grew up in the Boyceville area on the family farm. He was the youngest of four children graduating from Boyceville High School in 1972. Lloyd married Terri Titel June 12, 1976. They would later divorce but remained close. Together they raised three children. He was an avid hunter and fisherman. He also liked spending time with his children and grandchildren. In recent years, he was into learning about his ancestry. Loyd is survived by his two daughters, Rebecca (William) Link and Fawn Hernandez all of Menomonie; a son Anthony (Nicole) Lemon of Boyceville; nine grandchildren, Justin (Shawna), Damian and Kayla Link, Julio Hernandez, Jared, Austin and Eli Lemon, Kyleigh Pierce, and Michael Huntington; two step great-grandchildren, Jason and Christian, and one on the way. He is also survived by his ex-wife Terri; a brother Henry Lemon; sister Marie (John) Lockwald; sister-in-law Judy Lemon; his father-in-law James (Helen) Titel, Sr; brothers-in-law Jimmy and Mark Titel and Kelly (Valorie) Morse. He is further survived by many nieces, nephews, great-nieces and great-nephews. He was preceded in death by his parents Ernest and Fern; his brother Earl Lemon; his son Jeremy Lemon; son-in-law Federico; grandson Adin; niece Sheila Retzloff; great-nephew Johnathon Retzloff; and former mother-in-law Marlene Nelson; as well as a couple of four legged friends. A Memorial Service will be held at 1:00 p.m. Thursday, Oct. 4, 2018 at Olson Funeral Home in Menomonie with Pastor Randy Skow-Anderson officiating. There will be a visitation from 11:00 a.m. until the time of the service on Thursday.

The family of Loyd B. Lemon created this Life Tributes page to make it easy to share your memories.