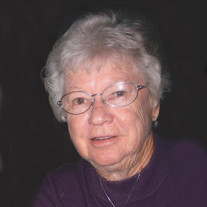 Lorraine D. Cotts, age 92, of Menomonie, WI died peacefully at The Neighbors of Dunn County on Thursday, March 11, 2021. Lorraine was born on January 25, 1929 in the Township of Dunn, Dunn Co. WI to George and Orpha (Sumter) Skillings. She was baptized and confirmed at Peace Lutheran Church in Menomonie. Lorraine was raised on the home farm, attended elementary school in Dunnville and later graduated from Durand High School. On June 1, 1948, Lorraine married Stanley Cotts at Peace Lutheran Church. They resided in Menomonie for many years. Lorraine retired from the Bank of Menomonie after 28 years. She started in the bookkeeping department and was the first women to achieve officer status at the bank. Lorraine was assistant vice president at the time of her retirement. Stan and Lorraine moved to Big McKenzie, near Spooner, WI in 1985. She was a very active member of the Trego Lions Club and she was a member of the McKenzie Lakes Assoc. Lorraine loved the outdoors, fishing, pontooning, canning, baking, and her flowers. And she especially looked forward to visits from all her nieces and nephews. Lorraine is survived by a sister Irene (Skillings) Cotts; a brother Daniel (Marg) Skillings; sisters-in-law, Dorothy Skillings and Kathie Skillings; a brother-in-law Robert Jensen; all of Menomonie. She was preceded in death by her parents; her husband Stanley; brothers, Don Skillings and Dale Skillings; sisters, Marlys Jensen and Wanda Mortel; brothers-in-law, Brownie Mortel and Darrell Cotts; a sister-in-law Susie Weber; and Lorraine’s faithful furry friends, Buddy, Buddy II, and Cooper. Funeral Services will be held at 11:00 a.m. Tuesday, March 16, 2021 at Olson Funeral Home in Menomonie, with Pastor Bob Friese officiating. There will be visitation at the funeral home one hour prior to the service. Burial will be in Rose Hill Cemetery in the Town of Dunn, Dunn Co. WI.

Lorraine D. Cotts, age 92, of Menomonie, WI died peacefully at The Neighbors of Dunn County on Thursday, March 11, 2021. Lorraine was born on January 25, 1929 in the Township of Dunn, Dunn Co. WI to George and Orpha (Sumter) Skillings. She... View Obituary & Service Information

The family of Lorraine D. Cotts created this Life Tributes page to make it easy to share your memories.