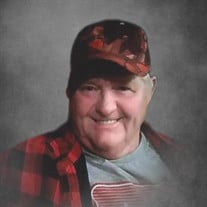 Lonnie LaVern Maves, of Menomonie, WI passed away peacefully March 4th at his home surrounded by family at the age of 70. Lonnie was born to LaVern (Pope) & Irene (Suckow) Maves on August 11th, 1950. He was raised in the Menomonie area and graduated in 1968 from Menomonie High School. Lonnie developed the love for farming at a young age growing up on the family farm, buying his first cow and starting his herd at age 16. He married Nancy Lund on July 5th,1969 and together they had 2 children Heidi and Chad. After two devasting fires, Lonnie and Nancy purchased his current residence in 1981 where he farmed up until his accident. Lonnie was loved by many and will leave behind a void in many hearts. He loved to have a good time and was always up to spending time with friends that were more like family. He was also willing to lend a helping hand or would volunteer for many organizations/events. If you saw Lonnie coming you knew he had some raffle tickets and you needed to get out your money $$$. His other love in life was that of being a farmer. It was all he ever knew. He often said he was going to give up farming, but when it came right down to it; he never could. He loved picking out a good milking cow, buying that grand bull and producing the best crops that he could. The end of an era went with him as he was the last farmer on County Trunk J. Lonnie is survived by significant other LuLu, children Heidi (Brett) Busch, Chad Maves and Eden Lembke; brother-in-law Harvey, siblings Polly (Tom) Persons, Chuck (Vicki) Maves; grandchildren Braden, Elizabeth and Andrew; several nieces, nephews and other relatives and friends. Lonnie is preceded in death by his parents Pope & Irene Maves, his sister, Bobbie and four faithful cow dogs Foxie, Bill, Sam and Jack. Private Memorial Services will be livestreamed at 1:00 p.m. Thursday, March 11, 2021 on www.facebook.com/OlsonFunerals . There will be a public visitation from 3:00 p.m. to 6:00 p.m. Thursday, March 11, 2021 at Olson Funeral Home in Menomonie. Private burial will take place at Cedar Falls Cemetery, Township of Red Cedar, Dunn County at a later date.

Lonnie LaVern Maves, of Menomonie, WI passed away peacefully March 4th at his home surrounded by family at the age of 70. Lonnie was born to LaVern (Pope) & Irene (Suckow) Maves on August 11th, 1950. He was raised in the Menomonie area and... View Obituary & Service Information

The family of Lonnie L. Maves created this Life Tributes page to make it easy to share your memories.