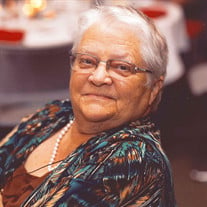 Lola May (Grimsrud) Bosse, age 78, of Knapp, Wisconsin, passed away Tuesday, October 4, 2016 at the American Lutheran Home in Menomonie, Wisconsin with family by her side. She was born March 17, 1938 in Britton, South Dakota to Otto and May (Rolsrud) Grimsrud. She grew up on the family farm in the Britton area, attending elementary school in Marshall County and graduated from Britton High School in 1956. After high school, she attended Northern State Teachers College in Aberdeen, South Dakota for a year. She then went to work for ASCS in Britton, South Dakota. Lola married Roger Bosse from Kidder, South Dakota on September 29, 1957 and shared a wonderful life together for 57 years. They were blessed with four children, Steven Bosse (Denise Behling) Champlin, MN; Richard Bosse (Patricia Hellendrung) Menomonie, WI; Bradley Bosse (Kendra Champion) Menomonie, WI; Lisa Bosse (Dennis Jorgenson) Knapp, WI. They settled the family in Knapp, WI where they owned and operated Roger’s Menswear in Menomonie, WI. She also worked for the University of Wisconsin Stout, the Dunn County Mutual Insurance Company and the Village of Knapp Water Utility Department. Lola was true to her Norwegian heritage, making lefse, krumkake and teaching her family these traditions. She was an active member of the Lutheran churches she attended over the years. Her faith was deep and carried her through her life. Lola’s greatest joy was her family and friends. She was a devoted wife and caregiver to all. She was preceded in death by her parents Otto and May, and husband Roger. Lola is survived by her four children; nine grandchildren; two great-grandchildren; two brothers; two sisters; many nieces and nephews; as well as other relatives and friends. A memorial services will be held at 11:00 a.m. Saturday, October 8, 2016 at Christ Lutheran Church in Menomonie, with Pastor Jeanne Warner officiating. There will be visitation at the church one hour prior to the service.

Lola May (Grimsrud) Bosse, age 78, of Knapp, Wisconsin, passed away Tuesday, October 4, 2016 at the American Lutheran Home in Menomonie, Wisconsin with family by her side. She was born March 17, 1938 in Britton, South Dakota to Otto and May... View Obituary & Service Information

The family of Lola May Bosse created this Life Tributes page to make it easy to share your memories.