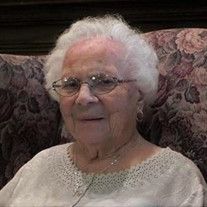 Lois Ione Edmonds Rassbach What a day that will be when my Jesus I shall see ... Lois took the hand of Jesus on February 18, 2018 and at the age of 100 years and five months she has reached her promised land. Lois loved to sing and wherever she might be she would proclaim what was on her heart. She was born in the home of her grandparents in Connersville, WI on September 22, 1917. At the age of two her family moved to Tramway and at five years of age moved to North Menomonie. Lois received her education in Menomonie beginning at North School and graduated from Menomonie High in 1935. After graduation Lois worked at R D Young Poultry Farm and in later years at Parker Pen. She retired from Bonded Collections with 20 years of service in 1982. She married Fred A. Rassbach on December 19, 1936 and settled in North Menomonie where they raised their family of five. They purchased property on Lake Tainter and in 1970 built a new home where Lois lived until 2006. Lois loved life; her sense of humor and quick wit was amazing. Her Memoirs reveal several risky adventures of her younger years. Her church and church family were an integral part of her life and she was the oldest living member of Immanuel Baptist having joined in January, 1930. She is preceded in death by husband "Fritz" (1986), her parents Claude and Elva Edmonds, four sisters, two brothers and her two youngest sons William (2009) and Michael (1984) Rassbach. Lois is survived by her children Joan (Curtis) Phillips of Pueblo, CO, Lawrence (Sharon) Rassbach of Menomonie and Doris (Rupert) Sanasac of Knapp, two daughters-in-law, Nora Rassbach of Texas and Ann Rassbach of Louisiana; her 12 grandchildren Wanda (Gerald) Adams, Wendy (Warren) Swarb, Sarah (Randy) Workman, Lori (Tim) Kurtz, Jeffrey (Lisa) Rassbach, Linda (Michael) Weisenberger, Jay Ludke, Julie (Charles) Cone, Marailee (Srikanth) Sripati, Michele Rassbach, Maranda Smith, Jennifer Rassbach; 21 great grandchildren and six great great grandchildren. The family would like to thank Dr. Rich, Our House Assisted Living and St. Croix Hospice for their compassionate care and support. A Celebration of Lois's life will be held at 11:00 a.m. Saturday, February 24, 2018 at Immanuel Baptist Church in Menomonie with Pastor Larry Borner officiating. There will be visitation from 4:00 to 7:00 p.m. Friday February 23, 2018 at Olson Funeral Home in Menomonie and at the church one hour prior to the service. Burial will be in Christ Lutheran Halverson Cemetery in Menomonie.

Lois Ione Edmonds Rassbach What a day that will be when my Jesus I shall see ... Lois took the hand of Jesus on February 18, 2018 and at the age of 100 years and five months she has reached her promised land. Lois loved to sing and wherever... View Obituary & Service Information

The family of Lois I Rassbach created this Life Tributes page to make it easy to share your memories.

What a day that will be when my Jesus...