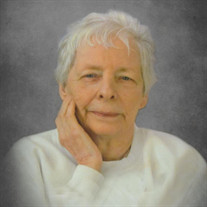 Lois K. Jacott, age 88, of Menomonie, WI and long-time resident of Duluth, MN died Saturday, July 18, 2020 at The Neighbors of Dunn County in Menomonie, WI. Lois was born on April 26, 1932 to Earl and Esther (McKee) Kinnee in Superior, WI. She attended Erickson Elementary School and graduated from Superior Central High School in 1950. Following high school, Lois achieved a degree in education from UW-Superior and graduated in 1954. She was also a member of Lamda Sigma Lamda Sorority. There she met her husband Ronald at a sorority, fraternity mixer in 1953. She then got her first teaching job in the fall of 1954 in Manitowoc, WI. Ronald and Lois were married in 1955. Lois and Ron moved into Lakeside neighborhood of Duluth MN in 1964. It was there they became longtime members of the Lakeside Presbyterian Church where Lois sang in the choir and became director of the pre-school. Following her retirement, they lived in Lake Nabagamon, Hermantown, and Menomonie. Lois enjoyed spending time with family, vacationing in Florida, and being a grandmother. Lois is survived by her sons, David Jacott of Menomonie, Gary (Louise) Jacott of Omaha, NE; Grandchildren, Colin Jacott, Grace Jacott, Matthew Jacott, Travis (Janna) Jacott; great granddaughter, Faith; son-in-law, David Uttley; as well as nieces, nephews, and other relatives and friends. She is preceded in death by her parents, Earl and Esther; husband, Ronald; and daughter Rebecca Uttley. Memorials in Lois’s name are suggested to The Neighbors of Dunn County in Menomonie. Graveside Services will be held at 2:30 p.m. Friday, August 7, 2020 at Evergreen Cemetery in Menomonie, WI.

The family of Lois K. Jacott created this Life Tributes page to make it easy to share your memories.