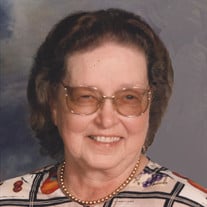 Lois Phoebe Hayes passed away Wednesday, April 18, 2018 in the company of her daughter and son-in-law. Born Phoebe Lois Vasey to Cecil and Bessie (Sanders) Vasey on February 9, 1926, she later chose to be known as Lois. She grew up in rural Eau Claire graduating from Elk Mound High School in 1944. She married Harley Hayes on January 18, 1957 at the Burr-Wesleyan Church near Hillsboro, WI. She interrupted her college career to devote herself to her family and after the children were grown she completed her education, graduating from UW Stout in 1981 with her Bachelor’s and Master’s degree in Home Economics, with her thesis on Step Family Relations. She spent time counseling and encouraging step families and teaching English as a Second Language to the Hmong community. She taught in area public schools and taught Sunday School for over 40 years in the First Church of the Nazarene in Menomonie. She most recently resided in the Colfax Health & Rehabilitation Center, where she would tell family and friends, “this is a good place, I am happy here!” Lois was a little woman with a truly generous heart, sharing all she had with her family and those around her. She had a way of making you feel special when you were with her. She was affectionately called “Little Grandma” by her grandson Sam, a name that stuck, and is remembered as being “better than Christmas” by her granddaughter Andi. She will be fondly remembered for her love of animals, homemade rolls and a cupboard full of treats. She expressed herself creatively in wool spinning and weaving, knitting and crocheting, tailoring and doll making. The greatest gift she leaves behind is love, her love for Jesus and her love for others. He is where she found her strength and her compassion. “I have learned in whatsoever state I am, therewith to be content.” Philippians 4:11, was her life verse. Lois is survived by her children Larry (Carol) Hayes, Cora Sue (James) Upchurch, Alvin (Sharon) Hayes, Charles (Kathy) Hayes, Cecil (Kelley Jo) Hayes, nine grandchildren and 15 great-grandchildren. Lois is preceded in death by her husband Harley Hayes, her son 1st Lieutenant Wayne Michael Hayes, a grandson Samuel Elliot Hayes, parents Cecil and Bessie Vasey, her two sisters and brother. A Memorial Service will be held at 10:30 a.m. Friday, April 27, 2018 at Holiness Heritage Church of the Nazarene in Menomonie with Pastor Travis Jackson officiating. There will be visitation at the church one hour prior to the service. Burial will be in Pleasant Valley Cemetery in the Town of Dunn, Dunn Co. WI. Olson Funeral Home in Menomonie is serving the family.

Lois Phoebe Hayes passed away Wednesday, April 18, 2018 in the company of her daughter and son-in-law. Born Phoebe Lois Vasey to Cecil and Bessie (Sanders) Vasey on February 9, 1926, she later chose to be known as Lois. She grew up in rural... View Obituary & Service Information

The family of Lois P. Hayes created this Life Tributes page to make it easy to share your memories.