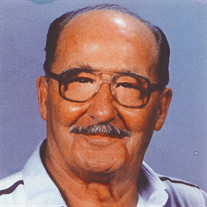 On August 3, 2015, just 26 days from his 100th birthday, Leonard H. Garton of Menomonie, WI passed peacefully from this earth into the arms of scores of friends and loved ones who preceded him. Except for three years during World War II while serving in the South Pacific with the United States Navy, Len lived, loved, worked, and played all his life in Menomonie. Len married the former Emily Schroeter on March 6, 1939 in Stillwater, MN and they celebrated 65 years together. After his return from the War, he worked for the Chicago Northwestern Railroad and then the US Postal Service for 30 years. He was a pitcher for the Menomonie Blue Caps in the 1930's. For over 60 years, if you were looking for Len, you would probably find him either bowling (high game of 289) or golfing at the Menomonie Country Club (3 holes-in-one, including one at age 89). Len loved animals of all kinds throughout his lifetime, especially his Boston Terriers. He approached life with a devilish smile and a twinkle in his eyes that has left fond memories for all who have crossed his path and shared his journey. He was extremely appreciative of all the dedicated people who provided him with loving support and care these last few years. Len is survived by his son, Gary Garton of Rhinelander, two granddaughters, Deborah Garton (Ferdinand Schlapper) of Woodbury, MN and Rebecca (Rick) Lovelace of Rhinelander, several nieces and nephews and other friends. He was preceded in death by his wife, Emily, his daughter-in-law, Mary Beth Garton, his brother, Lavern, and his parents. A celebration of Len's life will be held at 11 AM on Thursday, September 3, 2015 at Peace Lutheran Church in Menomonie, with Pastor Kristine Stedje officiating. Burial will be in the church cemetery. Family and friends may call at the church one hour prior to the service on Thursday.

On August 3, 2015, just 26 days from his 100th birthday, Leonard H. Garton of Menomonie, WI passed peacefully from this earth into the arms of scores of friends and loved ones who preceded him. Except for three years during World War II while... View Obituary & Service Information

The family of Leonard H. Garton created this Life Tributes page to make it easy to share your memories.