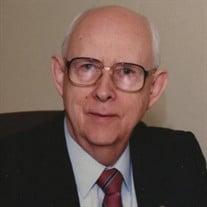 Lawrence Sydney Wright passed away on August 27, 2021 in Naples, FLorida at the age of 98. A son of Edgar and Josephine Loomis Wright, Larry was born in Fall River, Wisconsin on January 29, 1923. He was lovingly raised in Fall River by his aunt and uncle William Miller and Anna Wright Miller after Josephine’s sudden death ten days after his birth. After graduating from Fall River High School in 1941, Larry left to attend Stout Institute in Menomonie, Wisconsin where he would earn BS and MS degrees in Industrial Education. During this same time, he enlisted in the Naval Reserve in 1942 and served in the Navy from 1943-1946 as part of the amphibious forces in the Pacific Theatre. Larry married Jeanette Hamann of Columbus, Wisconsin on May 30, 1945. Their daughter Rebecca Ann Wright was born in Columbia, Missouri in 1948 and daughter Sandra Jean (Imdieke) was born in Great Lakes, Illinois in 1952. After the war, Larry joined the faculty at Iowa State Teachers College (now University of Northern Iowa) in Cedar Falls, Iowa from 1949-1951 and again from 1954-1967. Lt. Wright was recalled into the Navy in 1951 where he served at the Instructor Training School in Great Lakes, Illinois. He completed his Ed.D. at the University of Missouri in 1954 and during his tenure at ISTC authored the textbook Drafting: Technical Communication. In 1967 Larry became a faculty member at the University of Wisconsin-Stout until his retirement from his position as Associate Dean for Graduate Studies and Curriculum in 1988. Throughout their marriage and in retirement Larry and Jeanette treasured their church community, traveling, and visiting family and grandchildren until Jeanette’s death in 1992. Larry continued his lifelong dedication to Rotary by serving as a District Governor during this time. In 1996 he married Lorna Gauthier of Menomonie, Wisconsin. Larry and Lorna also traveled extensively, cherished church and musical activities, and enjoyed spending time with family, now expanded to include Lorna’s six adult children and their families. Larry’s life was distinguished as one of service. Whether as a young Eagle Scout, a president of the PTA, church treasurer, computer teacher in his retirement community, Chair of the Myrtle Werth Hospital Board, or when gifting handmade packs of greeting cards to all Lely residents on their birthday, throughout his life Larry sought opportunities to serve others. His spirit of generosity, quiet strength, and subtle humor will be missed by his many friends and his loving family. Larry is survived by his wife Lorna; daughters Rebecca (Ed Fromkin) Wright and Sandra (Al) Imdieke; stepchildren Meri (Janice Culnane) Gauthier, Charles (Jeri) Gauthier, Gregory (Travis Armstrong) Gauthier, Michael (LeAnn Geshick) Gauthier, Tracy Gauthier, and Betsy (Steve) Gauthier-Koth; sisters-in-law Char (Don) Miller and Phyllis (Eugene) Hamann; and many grandchildren, great grandchildren, nieces and nephews. He is preceded in death by his parents Edgar and Josephine Wright and William and Anna Miller; his wife Jeanette Wright; brothers Charles Wright, Robert Wright, Milford Wright, Bill Miller, Don Miller; sister Mary Lu Jedamus; brothers-in-law Eugene Hamann and Paul Jedamus; sisters-in-law Beverly Miller, Lorraine Wright, Lucille Wright and Esther Wright. A Celebration of Life will be held at Lely Palms Retirement Community, Naples, Florida, on August 31, 2021. Interment will occur at 2:00 p.m. on October 16, 2021 at Evergreen Cemetery in Menomonie, Wisconsin with military honors by Menomonie Veterans Honor Guard. In lieu of flowers, Gifts in memory of Larry can be made by check, payable to the Stout University Foundation and directed to the Stout University Foundation, PO Box 790, Menomonie, WI 54751. Please add in the memo line of the check “Gauthier/Wright Endowment Fund.” If individuals would like to make a gift by credit card, visit: https://www.uwstout.edu/make-gift-uw-stout In the Comment Box, please add ‘In Memory of Larry Wright”.

Lawrence Sydney Wright passed away on August 27, 2021 in Naples, FLorida at the age of 98. A son of Edgar and Josephine Loomis Wright, Larry was born in Fall River, Wisconsin on January 29, 1923. He was lovingly raised in Fall River by his... View Obituary & Service Information

The family of Lawrence S. Wright created this Life Tributes page to make it easy to share your memories.