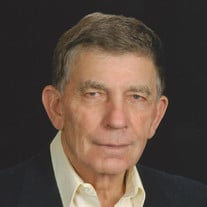 Larry Drier, age 84, of Eau Galle, WI passed away passed away after a long and courageous battle with cancer on Sunday, February 7, 2021 at Mayo Luther Hospital surrounded by loved ones who will continue to honor his legacy by living their lives to the fullest. His cheerful attitude and bright smile will be missed by many. He was born March 3rd, 1936 in Eau Galle, WI to Giles and Ethel (Schlosser) Drier. He grew up in the Eau Galle area and graduated from Durand High School in 1954. Larry married Virginia (Cale) Drier on August 18th, 1958 at St. Henry’s Catholic Church in Eau Galle, WI and farmed with his father until they purchased the farm where he later installed a milking parlor in 1962 while beginning to cash crop. They had three children. Julie of Chaska, MN, Scott (Jacki) of Arkansaw, WI/Lake Havasu, AZ, and Bethany of Boulder CO. Larry and Virginia enjoyed traveling together with their family particularly out west, through the Rocky Mountains. While they visited his parents in Florida through the 70’s every winter. They later purchased a winter home in Lake Havasu, AZ. Larry was a very hard worker while still having a great sense of humor. His favorite days were in his combine harvesting the crops. Larry also sold Tracy’s seed corn for many years. He was well liked by the community and everyone that he met, as well as being beloved by his family. Larry is survived by his wife, Virginia, daughter Julie, son and daughter-in-law Scott and Jacki, and daughter Bethany. He is also survived by grandchildren, Chad (Caitlin) Drier, Brady Drier, Austin Drier, Savannah Drier along with a great grandson, Easton Drier. Other relatives include sister-in-law, Carol Wendt and nieces (Cindy and Tami) and nephew (Tony) along with other relatives and friends. He was preceded in death by his parents, Giles and Ethel Drier, Virginia’s parents, Richard and Luella Cale, his brother-in-law, Clifford Wendt, along with other close friends and relatives. Private Funeral Services will be held at 2:00 p.m. Wednesday, Feb. 10, 2021 at Olson Funeral Home in Menomonie with Pastor Randy Skow-Anderson officiating. The service will be livestreamed at www.facebook.com/OlsonFunerals. Burial will be in Christ Lutheran Halvorson Cemetery in Menomonie, in the spring. A Celebration of Life will be held Sunday, June 13, 2021 at the Durand Rod & Gun Club from 11:00 a.m. to 2:00 p.m. A light luncheon will be served.

Larry Drier, age 84, of Eau Galle, WI passed away passed away after a long and courageous battle with cancer on Sunday, February 7, 2021 at Mayo Luther Hospital surrounded by loved ones who will continue to honor his legacy by living their lives... View Obituary & Service Information

The family of Lawrence "Larry" W. Drier created this Life Tributes page to make it easy to share your memories.