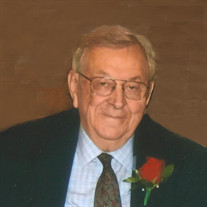 LaVerne George Ausman, age 91, of Menomonie, WI, formerly of Elk Mound, WI, passed away on December 14, 2021 at Mayo Clinic Health System in Eau Claire, WI. LaVerne was born February 18th, 1930 in Eau Claire, and grew up on the family farm in Elk Mound. In 1949 he married Beverly Anderson at Big Elk Creek Lutheran Church. They had two children, Georgia Ann and John, and enjoyed 65 wonderful years of marriage. Later in life LaVerne married Flora Lehman at Shepherd of the Hill Lutheran Church. After graduating from Elk Mound High School in 1948, he attended the Farm and Industry Short Course at UW-Madison. In the next year he began farming in partnership with his father, George Ausman, and spent the next 25 years expanding and improving the farm and serving in a number of civic and agri-business roles. He was especially proud to see the family farm continue in the hands of his son, John, and grandson, Jeff, and achieve Sesquicentennial Farm status in 2014. Beginning in the mid-1970’s, LaVerne was elected and appointed to a succession of state and federal government offices. He was elected to two terms as a State Representative in the Wisconsin Legislature and served as Secretary of the Wisconsin Department of Agriculture, Trade, and Consumer Protection. He also held several positions in the United States Department of Agriculture, culminating in an appointment as the head of the Farmers Home Administration in 1989. After his time in the USDA ended, he returned to Elk Mound, where he remained active in public service and private endeavors. He notably served as an advisor to US Congressman Steve Gunderson, as the executive chair of the 1998 Dunn County Farm Progress Days, as executive director of the Western Wisconsin Renewable Energy Cooperative, on the board of directors of Wisconsin Agricultural and Life Sciences Alumni Association, and in other roles on Boards and Foundations too numerous to mention. Throughout his life, LaVerne’s faith was a daily touchstone. He was active in several Lutheran Churches as a choir member and director, church council member, and Sunday school teacher. His high school yearbook claimed, “he would rather talk than eat,” and it was certainly true. He loved to travel and entertain and made lifelong friends all over the world. He loved music, both performing and listening, especially vocal music. LaVerne and Bev sang together at many events, providing special memories for both friends and family. He delighted in his grandchildren and great-grandchildren and was a devoted caregiver to Bev in her final years. LaVerne will be sadly missed by his second wife of five years, Flora Lehman; two children – Georgia Ann (John) Bancroft of Brunswick, ME and John (Mary) Ausman of Elk Mound, WI; six grandchildren – Andy (Beth) Ausman of New Prague, MN, Sam (Rachel Quam) Ausman of Minnetonka, MN, Sara Ausman of Eau Claire, WI, Elizabeth (Shawn) Gallagher of Whitefield, ME, Carolyn (Demetri Blanas) Bancroft of Bath, ME, Jeff (Krista) Ausman; and ten great-grandchildren – Alex and Weston Ausman, Greta and Berit Ausman, Peyton, Eleanor, and Lila Ausman, Marcel and Joan Blanas, and Arthur Gallagher; many cousins, and numerous friends. He was preceded in death by his first wife, Beverly Ausman, and his parents George and Anna Ausman. A memorial service will be held at 2:00 p.m. Saturday, April 9, 2022 at Shepherd of the Hill Lutheran Church, in Elk Mound, WI. There will be visitation from 4:00 to 7:00 p.m. Friday April 8th, at Olson Funeral Home in Menomonie and at the church one hour prior to the service. Burial will be in Evergreen Cemetery in the Town of Elk Mound, Dunn Co. WI. Memorials are suggested to the charity of your choice.

The family of LaVerne G. Ausman created this Life Tributes page to make it easy to share your memories.