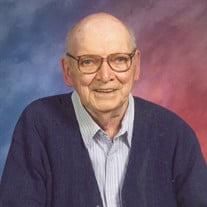 Lavern Orville Forster, 96 years, died peacefully on August 8, 2015 at the American Lutheran Home in Menomonie with family at his side. Lavern was born to George B. Forster and Clara Fladten Forster in Menomonie, Wisconsin on June 10, 1919. With the exception of his service in the Army Air Corps during World War II and his recent time at the American Lutheran Home, he lived all his life in his family home. He developed interests early in life that he followed through all his days. His parents ensured he attended Sunday school, where he learned lessons of faith that he could recall and build on in his later life. He actively studied the Bible and served his church for many years. As a boy, reading the newspaper accounts of Charles Lindbergh’s solo flight from New York to Paris sparked his interest in aviation. He built many model and RC planes through the years. Lavern had quite an ear for music and especially enjoyed the “big band” sound. He learned to play his father’s saxophone and felt lucky to receive his own as a gift at high school graduation. He played and entertained in many communities with his father, and others, as The Royal Blackhawks. Extremely proud of his country, he served during World War II and was stationed on the west coast, including training at Washington State University, and in India. He spoke often of this time and what he learned about foundries, airplanes, and his appreciation of the diversity of people he would meet in life. In the family business, Badger Iron Works, he became a foundryman. First melting iron in a cupola, and later in an induction furnace, he learned the iron casting business with his father and his uncle, and then carried it on with his brother. From hand-packing molds on a dirt floor, to using automated molding machines, and after relocating into a new plant as the first business in the Menomonie Industrial Park, he was always ready to talk foundry-where it had been and where it was going. Keeping with his mother’s love of animals, he had several dogs over many years. The last, Poochie, came to Lavern from the Humane Society and proved to be his favorite. They shared many good times together at home, at work, and at his cabin. Lavern also kept his mother’s garden going until he moved to the American Lutheran Home in 2009. He grew his favorites using heritage seeds and appreciated their history. Lavern was amazed by all the inventions and discoveries in his lifetime, and he believed that we can hardly imagine all the new things yet to come. Lavern is survived by his sister-in-law Gertrude Forster of Menomonie, his nephew Mark and Mark’s wife Elizabeth of Menomonie, his niece Susanne Herman of Evansville, Wisconsin, his great nephews and nieces Christopher Forster, Laura Forster Sutton, Katie Forster, Benjamin Herman and Alexis Herman. Preceding Lavern in death were his parents and his brothers George and William. Olson Funeral Home is serving the family. Visitation will be on Wednesday, August 12 from 5:00 to 7:00 p.m. and one hour prior to the service. The funeral service will be held on Thursday, August 13 at 11:00 a.m. at the Olson Funeral Home Chapel with Pastor Wendy Slaback presiding. Interment to follow at Evergreen Cemetery in Menomonie. In lieu of flowers, Lavern preferred that memorials would be directed to the United Methodist Church of Menomonie or the Dunn County Humane Society in Menomonie.

Lavern Orville Forster, 96 years, died peacefully on August 8, 2015 at the American Lutheran Home in Menomonie with family at his side. Lavern was born to George B. Forster and Clara Fladten Forster in Menomonie, Wisconsin on June 10, 1919.... View Obituary & Service Information

The family of Lavern O. Forster created this Life Tributes page to make it easy to share your memories.