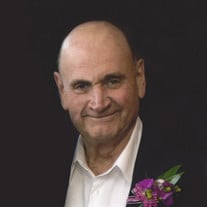 Lauren “Larry” H. Wagner, age 79, died at The Neighbors of Dunn County in Menomonie, WI on Monday, October 8, 2018. Lauren was born on December 8, 1938 to the late Edith and Hugo Wagner. He attended Menomonie area schools and graduated from Menomonie High School. On July 31, 1982 he married his love, Frances (Ann) Newman Giertz. Lauren “Larry” served in the National Guard from 1954-1963. He served in Company A, 1st Battalion 128th Infantry Division. He worked for the Dunn County Highway Department for 31 years until his retirement. He was very proud of his time and service to his country and to the quality of his work. Larry had his private pilot’s license and enjoyed flying for many years. He loved the outdoors, photography, astronomy, music, making projects such as porch swings, watching the Green Bay Packers, traveling and listening to The Memories perform. Larry and Ann were members of Peace Lutheran Church in Menomonie, Wisconsin and resided in Menomonie. Larry was a devoted and loving husband, son, brother and step- father. He is reunited with his wife as well as his parents and sister Joan Wagner that passed before him. Larry is survived by his stepchildren and their families. Kimberly (David) and their three children, Brianna, Mariah and Isaiah of Kimberly, WI. Terrance (Rosa) of Menomonie and their children, Tucker (Susie) and their two children Jaxon and Tatum. Wendy (Trent) and their two children, Chase and Croix. Robert Giertz, Menomonie. Linda (Wayne) of Menomonie and her two children, Troy (Kris), son Brock and Brady (Mary) son Sawyer. Randy (Pam) of Menomonie and his two children, Amy (Scott) children Mack and Beau, Cory (Molly) children Grant, Charlie, Grace and Joseph as well as neighbor and friend Kathleen Schlueter. Funeral services for Lauren “Larry” Wagner will be held at Peace Lutheran Church in Menomonie, Wisconsin on Saturday, October 20, 2018. Visitation will be held from 10-noon on Saturday before the Celebration of Life service at noon on October 20th at Peace Lutheran Church. Burial services will be held at Peace Lutheran Church Cemetery following the service with military honors by Menomonie Veterans Honor Guard. Lunch will be provided at Peace Lutheran Church following the burial. We would like to thank all the staff of Neighbors of Dunn County, his family physician as well as Hospice for their loving and caring support.

The family of Lauren "Larry" H. Wagner created this Life Tributes page to make it easy to share your memories.