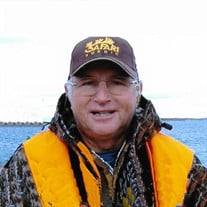 Larry Arthur Hayes, age 79 of Boyceville, WI was called by his heavenly father to come on home Friday, June 26, 2020 at home surrounded by his loving wife and family after a courageous 10-month battle with pancreatic cancer. He was born July 5, 1940 in Wisconsin Rapids, WI. to Harley and Iona (Lewis) Hayes. He graduated from Elk Mound High School in 1958 and served in the United States Navy from 1958 to 1962 while stationed in Washington and Alaska. He met the love of his life, Carol Pearson on Friday night, June 19, 1964 while selling used cars in Rockford, Illinois to help make payments on his 1963 red Corvette Stingray. They dated for a year and married on June 26, 1965. They moved to Menomonie, WI on June, 18, 1967. On June 22, 1967, Larry repented of his sins and asked Jesus Christ into his life to be his Lord and Savior, and never looked back. They eventually built their home on a hobby farm south of Wheeler in 1974 where they raised their three children; Pete, Kari and Wayne Michael. Larry was a union ironworker since 1965. Together with Carol, they started Red Cedar Steel Erectors, Inc. in June of 1977. In 2017, the company reached its 40-year anniversary under the leadership of his sons and that was a proud moment for him. Besides being a hard worker, he was an avid sportsman who loved hunting and fishing all across North America, Brazil and Sweden with family and friends, and most especially his lifelong best friend Mark Butler. He also enjoyed going on mission trips to build churches in the Bahamas and Antigua. For many summers he enjoyed helping with Teen Bible Camp. He would bring his boat during the week of camp and take people fishing. He also enjoyed helping in the kitchen and catching enough fish to have a fish fry for the whole camp Larry is survived by his loving wife of 55 years, Carol, son Peter, daughter Kari & husband Butch Halling and son Mike & wife Celina. His grandchildren; Ryan, Nicholas (Kelsey), Alexander, Brady, Brooke and Brenna and one great-granddaughter Harper Hayes. Two step-granddaughters; Amy and Stacy, along with step-grandchildren; Henry, Ivan, Raymond, Tyler and Lauren. He is also survived by sister Corie (Jim) Upchurch of Decatur, IL, and three brothers; Rev. Alvin (Sharon) Hayes of Olathe, KS; Rev. Charles (Kathy) Hayes of Greeley, CO; and Cecil (Kelley Jo) Hayes of Wheeler, WI.; 14 nieces and nephews, and many other relatives and friends. He was preceded in death by his parents Harley and Iona, his stepmother Lois, his brother 1st Lt. Wayne M. Hayes (killed in Vietnam 1967), his baby daughter Ann Margaret and his nephew Samuel Hayes. The family would like to thank Dr. Basu and the team from Luther Cancer Center and the great staff from Mayo Home, Health and Hospice for their hard work, kindness and compassion. Funeral services will be held at 10:30 a.m. Wednesday, July 1, 2020 in the tent outside the New Life Church of the Nazarene in Wheeler, WI with Pastor Kevin Hagen officiating. There will be visitation from 4:00 to 8:00 p.m. Tuesday, June 30, 2020 in New Life Church of the Nazarene with the tent outside for people to gather after paying their respects. Social distancing guidelines and facial coverings are recommended. Burial will be in Pleasant Valley Cemetery in the Town of Dunn, Dunn Co. WI (southeast of Menomonie and Downsville on Co. Rd. Y) with military honors by Menomonie Veterans Honor Guard. Olson Funeral Home in Menomonie is serving the family.

Larry Arthur Hayes, age 79 of Boyceville, WI was called by his heavenly father to come on home Friday, June 26, 2020 at home surrounded by his loving wife and family after a courageous 10-month battle with pancreatic cancer. He was born July... View Obituary & Service Information

The family of Larry A. Hayes created this Life Tributes page to make it easy to share your memories.

Larry Arthur Hayes, age 79 of Boyceville, WI was called by his...