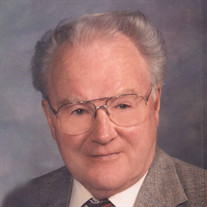 Kenneth Allen Tilleson, age 94, of Menomonie, WI passed away unexpectedly while in the hospital on Mon. Aug.29, 2016. Ken was born on July 9, 1922 in Elk Mound, WI to Karl and Hilda (Braaten) Tilleson. His early years were spent in Elk Mound and later in Cedar Falls where he met his wife Mary (Schultz). They were married on Sept 25th, 1946 at Peace Lutheran Church, and were together for 68 years until she passed away in Oct of 2014. They lived the majority of their lives in Cedar Falls and in later years at the Comforts of Home. Ken spent the last year at the Neighbors of Dunn County. Ken worked most of his life as a licensed butter maker for Sanna Dairies in Menomonie. After retiring he and Mary spent many years traveling the US and Europe. He was an avid sports fan; active in his early years coaching baseball and supporting his 2 sons in their various sporting activities. He loved to watch the Packers, Badgers, Brewers and all Menomonie sports. One of his great thrills was attending the Rose Bowl to see the Badgers play in 1994. He also enjoyed fishing, especially on the Red Cedar River in Cedar Falls. He was a very active member of Peace Lutheran Church for many years. He ushered on a regular basis, coordinated readers for the lessons for Sunday services and attended many of the events that took place at church. Ken is survived by his three children, Peggy Voigtschild of Appleton, WI, Dennis (Joni) Tilleson of Loveland, CO, and Cory (Judy) Tilleson, of Eau Claire, WI; grandchildren, Kent (Varsovia) Voigtschild of Tinley Park, IL, Shawn (Richard) Einerson, of Rochester, MN, and Josh (Rebecca) Tilleson of Jupiter, FL; great-grandchildren, Keana Voigtschild, Christian and Grayson Tilleson; step-grandchildren, Joel (Stephanie), Jordan (Kimberly), Jocelyn (Adam); step great-grandchildren, Paige, Jael, twins Jackson and Jensen, Addison, Avery, Trent; a sister, Carol (Richard) Landberg of Austin, MN as well as nieces, nephews other relatives and friends. He was preceded in death by his parents, Karl and Hilda Tilleson, wife Mary, sisters, Borgie Sabatke, Norma Cartwright, and Rose Hellendrung, brothers, Erv, Paul “Swede”, and Jim, and a son-in-law, Jerry Voigtschild. Memorial services will be held at 11:00 a.m. Saturday, September 3, 2016 at Olson Funeral Home in Menomonie with Pastor David Natzke officiating. Burial will take place at a later date at Cedar Falls Cemetery. There will be a visitation one hour prior to the service at the funeral home.

Kenneth Allen Tilleson, age 94, of Menomonie, WI passed away unexpectedly while in the hospital on Mon. Aug.29, 2016. Ken was born on July 9, 1922 in Elk Mound, WI to Karl and Hilda (Braaten) Tilleson. His early years were spent in Elk Mound... View Obituary & Service Information

The family of Kenneth A Tilleson created this Life Tributes page to make it easy to share your memories.