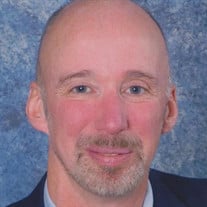 Kenneth E. Mueller Kenneth E. Mueller passed away at Luther Hospital in Eau Claire, WI on Thursday, March 3, 2016 due to complications from a severe heart attack on February 3, 2016. He was born August 10, 1956 in Elgin, IL. He graduated from Barrington High School in 1974 and continued his education at Western Illinois University pursuing a degree in Education specializing in Learning Disabilities and graduated in 1978. He continued to further his education at Concordia University for a MA in Secondary Education. He met his late wife Sue while teaching at McHenry High School. The two married on June 16, 1984. The family moved to Menomonie, WI in 1990 where He taught Special Education at the High School and Middle School for 20 years. He passed on his love for sports by coaching both basketball and baseball during his time as a teacher. His interests were spending time with his granddaughter Gracie, enjoying his two yellow labs Elwood and Jake, playing golf and basketball with his brother, friends, and kids. He also loved working on home improvements and constructing furniture, and always being there for his family. Ken will be remembered as a devoted husband, father, brother, grandfather, and friend. Ken is survived by his children Eric, Kenneth (K.J.), Katelyn, granddaughter Gracie, sister Sue Sloan, brother Rich Mueller (wife Kathy), brother Chris Mueller, sister-in-law Linda Pierce (husband Curtis), brother-in-law Fred Long (wife Shannon), in-laws Jim and Lois Long, and many nieces, nephews, great nieces, great nephews, cousins, and friends. He was preceded in death by his wife Susan Mueller, brother-in-law Tom Sloan, parents Richard and Gloria Mueller. Funeral Services will be held at 6:00 p.m. Tuesday, March 8, 2016 at Cedarbrook Church (N6714 470th St. Menomonie) with Pastor Remy Diederich officiating. There will be visitation at the church from 2:00 to 6:00 p.m. on Tuesday. Olson Funeral Home of Menomonie is serving the family.

Kenneth E. Mueller Kenneth E. Mueller passed away at Luther Hospital in Eau Claire, WI on Thursday, March 3, 2016 due to complications from a severe heart attack on February 3, 2016. He was born August 10, 1956 in Elgin, IL. He graduated... View Obituary & Service Information

The family of Kenneth E. Mueller created this Life Tributes page to make it easy to share your memories.