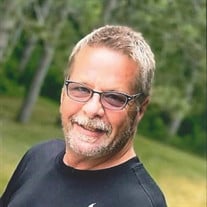 Kelly Blake Cole “Jelly Flake Bowl” Kelly B. Cole, age 64, of Eau Claire, WI passed away unexpectedly on Wednesday, September 22, 2021 at Mayo Clinic Health System in Eau Claire. Kelly was born Sept. 9, 1957 in Rockford, IL to John T. Cole “Hap” and Bonnie Sue (Ragan) Cole. He grew up in Sterling, IL and graduated from Sterling High School in 1975…BARELY lol. Kelly married his childhood sweetheart, Cindy Jo Tryggestad on September 20, 1975 at the Nazarene Church in Sterling. They achieved their American Dream when they had their two beautiful children Brett and Leslie. Kelly’s love of music was never ending, so much so that he served as a background singer for Tony Orlando for two seasons in Las Vegas. Kelly was a light in the darkness, could fill a room with laughter, and never met a stranger. He was known for saying “new rule” and in Kelly fashion: New rule! It is time for us to find a new normal. Kelly is survived by his wife Cindy, his son Brett (Joanna) of Wheeler, his daughter Leslie of Eau Claire; siblings Susie (Steve) Barnet, Kerry (Sandy) Cole, Dale (Penny) Cole, and Tracy (Cyndi) Cole; grandchildren Lexi, Natalya, and Eli “Buddy” as well as many nieces, nephews and other relatives. He was preceded in death by his father, John “Hap” Cole. Although it was never spoken, Kelly knew he was his father’s favorite. The outpouring of love from his friends and “family” has been amazing and such a comfort to the family in this time of loss. The family wants to thank all of those who have given so selflessly. It has not gone unnoticed. Funeral services will be held at 11:00 a.m. Wednesday, Sept. 29, 2021 at Olson Funeral Home in Menomonie with Pastor Kevin Hagen officiating. There will be visitation at the funeral home from 4:00 to 7:00 p.m. Tuesday and one hour prior to the service on Wednesday.

The family of Kelly B Cole created this Life Tributes page to make it easy to share your memories.