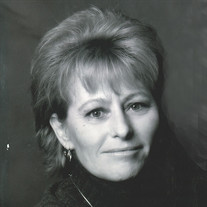 Katherine Bryan, age 61, of Menomonie, WI passed away surrounded by her family on August 29,2018. Kathy was born on December 11, 1956 in Menomonie, WI to Allen Andrews and Nancy Decker. She was the oldest of four children and grew up with her family in the Boyceville area. She graduated from Boyceville High School in 1975. Kathy loved being with people. She was active in a bowling league in her younger years followed by many years shooting pool and playing bean bags, sometimes for competition and always for the fun and joy of being with others. While born and raised in Wisconsin she was a lifelong Vikings fan. Fairweather does not describe her devotion to the purple and gold. When the Vikings weren’t playing she could be found watching her favorite NASCAR driver, Dale Jr. Her passion for racing took her to multiple race tracks over the years. Those trips were the highlight of her travel as an adult. She enjoyed camping for many summers. Caravanning to a weekend hideaway and surrounding herself with people and laughter was a favorite hobby. Her infectious giggle was a constant marker of her love for life, family, and friends. She raised two children, Joseph Daniel and Jill Marie Bryan. She was relentless in her support and love for both her children. This love was magnified by the addition of grandchildren. Adrianna, Camdan, Hazel, James, and Kingston were the light of her life in the past years. She loved no roll more than being Grandma Kathy. Kathy spent the majority of her work life with 3M both in Menomonie, WI and Saint Paul, MN until her car accident in August of 2005. While her physical abilities were forever changed 13 years ago, her generosity, spunk and sheer determination to live her life on her own terms preserved and is what defined her to her friends and family for the remainder of her life. Kathy is survived by her children, Joseph Bryan (Danielle Burress) and Jill Bryan (Ian Miller); her beloved grandchildren; father, Allen (Marlys) Andrews; mother, Nancy Burton; siblings, Kelly (Dave) Stark, Kimberly (James) Goss, and Jeff Andrews; step-siblings, Larry (Patty) Benitz, Jim (Pam) Benitz, Janelle Spadgenske and Jolene (Steve) Bird; as well as many loving nieces, nephews, relatives and friends. She is preceded in death by her step-father, Donn Burton; grandparents Ned and Tinka Andrews and Earl and Lucille Decker. Kathy’s family would like to extend their heartfelt gratitude to the CCU staff at Luther Midelfort Hospital in Eau Claire, WI. The care both she and her family received during the last three weeks was outstanding. Kathy was treated with the utmost dignity, kindness and respect. Thank you. A visitation is scheduled from 4-6:30 PM with a memorial service from 6:30-7:00 PM on Tuesday, September 11, 2018 at Olson Funeral Home in Menomonie, WI.

Katherine Bryan, age 61, of Menomonie, WI passed away surrounded by her family on August 29,2018. Kathy was born on December 11, 1956 in Menomonie, WI to Allen Andrews and Nancy Decker. She was the oldest of four children and grew up with... View Obituary & Service Information

The family of Katherine "Kathy" L. Bryan created this Life Tributes page to make it easy to share your memories.