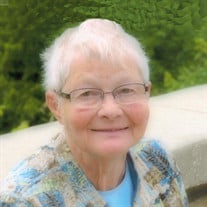 Karen J. Bloodhart, age 79, of River Falls, WI, passed away on Tuesday, December 4, 2018. Born in Algona, IA, on July 6, 1939, Karen was the youngest of five children of Harm and Florence (Banwart) Helmers. She graduated from Algona High School and the surgical technician program at the University of Iowa. Karen married John Bloodhart on September 3, 1964. They had three children who they raised for many happy years on Tainter Lake before John’s death in 1984. She was a loving and active mother to her children and a mother-figure to many. The greatest loves of her life were her grandchildren, who she bragged of often. Karen will be remembered as a generous soul who opened her heart and home to many. She had a bright smile and laughed often, even at herself. Karen loved to be active and it was often hard to keep up with her. Karen was a consummate caretaker and loved her CNA work for many years at the Dunn County Health Care Center, and then at Brotoloc post-retirement. Karen is survived by children, Alison Bloodhart of Wanderlust, Ann (Randy Romes) Bloodhart of Mounds View, MN, Paul (Stesha) Bloodhart of River Falls, WI; grandchildren, Joshua Mieher, John, Evan, and Ryan Romes, and Preston and Parker Bloodhart; sister, Bev Helmers; brother, Harlan Helmers; and sister-in-law Diane (Cliff Burgess) Bloodhart. Karen was preceded in death by her husband, John; parents, Harm and Florence; brothers George and Eldon; mother-in-law Alice; and her beloved dog, Pepe. While Karen suffered from dementia for several years, she was blessed to have lived at Comforts of Home for the last two years with her oldest friend and sister Bev. Karen’s greatest wish was to donate her brain so that the causes and treatment of dementia could be studied. In lieu of flowers, please consider donations to RHF Alzheimer’s Research where she donated her brain (640 Jackson Street, MS 11202C, St. Paul, MN 55101; www.alzheimersinfo.org) or to a local charity that makes a big difference to children in your area. A celebration of Karen’s life will be held at 1:00 p.m. Sunday, Dec. 16, 2018 at Olson Funeral Home, 615 Wilson Ave., Menomonie, WI. There will be visitation from 11:00 a.m. until the time of the service at the funeral home.

The family of Karen J. Bloodhart created this Life Tributes page to make it easy to share your memories.