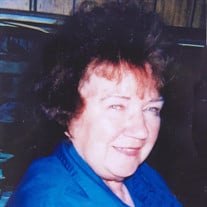 June B. Johnson, age 75, of Knapp, WI passed away Sunday, May 14, 2017 at Mayo Clinic Health System in Eau Claire, WI. The former June Blanche Lemler was born Sept. 2, 1941 in Colfax, WI to Earl and Alma (Ellis) Lemler. On May 2, 1959 June married Floyd “Chuck” Johnson in Hudson, WI. June worked as a cook for Indianhead and later at Kwik Trip, retiring after more than 30 years. She enjoyed gardening, canning, camping and fishing especially in Alaska. Her grandchildren and great-grandchildren were a big part of her life and she always made sure they were taken care of. June will be sadly missed. June is survived by her daughter, Brenda Parsons of Knapp, WI; sons, Mark (Shirley) Johnson of Wasilla, AK and Mick (Becky) Johnson of Knapp; grandchildren, Brandon (Ambree) Parsons, Josh Johnson, Matthew Stansbury, Brittany Johnson, Sarah Johnson, Nicole Abadia, Brady Johnson and Brandi Johnson; great-grandchildren, Makaden and Piper Parsons, Glenn and Abel Avila; and her brother Al Lemler of Great Falls, MT. She was preceded in death by her parents; her husband Floyd; brother Earl Lemler and sister-in-law Marge Lemler. A Memorial Service will be held at 11:00 a.m. Friday, May 19, 2017 at Olson Funeral Home in Menomonie, with Pastor Sarah Miller officiating. There will be visitation at the funeral home one hour prior to the service on Friday. Burial will be in Forest Hill Cemetery in the Town of Stanton, Dunn Co. WI.

The family of June B. Johnson created this Life Tributes page to make it easy to share your memories.