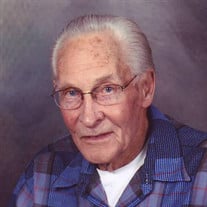 Juel John Johnson, age 91, of Colfax, WI passed away Tuesday, Dec. 15, 2015 at The Neighbors of Dunn County in Menomonie, with his family by his side. He was born Oct. 17, 1924 in Colfax, WI to Arthur and Dina (Christianson) Johnson. Juel graduated from Colfax High School. On June 11, 1949, Juel married Juanita Geske and has resided in rural Colfax his entire life. Juel worked hard his whole life and enjoyed all of it. He was a farmer and raised beef cattle, logged and cut pulp wood, worked at West-Cap driving delivery truck and worked in the family business (Johnson Trailer Co). He never retired and had a strong belief that everyone was put on this earth to work. All who knew Juel would say he had the kindest heart and a special way with children and animals. He will be dearly missed by all his family, friends, special cat “Nancy” and donkeys, “Dixie and Jackson”. Juel is survived by his son, Donald (Debby) Johnson of Colfax WI, daughters, Barbara Johnson of Menomonie WI, Jane (Terry) Molde of Menomonie WI; a brother, Louis Johnson of Menomonie WI; sister-in-law, Margie De Mars of Conover WI; cousin, Carol Endl of Eau Claire WI; grandchildren, Jamie Johnson, Caia Johnson, Luke (Liz) Johnson and Alyssa Whatley; step-grandchildren, Joby (Stephanie) and Kori Molde; great-grandchildren, Ian Johnson, Luke Johnson Jr. and Bailey Johnson; and seven step-great-grandchildren; as well as other relatives and friends. He was preceded in death by his parents, Arthur and Dina Johnson, his wife, Juanita and sister-in-law, Helen Johnson. A special thanks to The Neighbors of Dunn County and all their caring staff, St. Croix Hospice, Mayo Clinic Health System in Menomonie, also Dr. Thirumalai, Dr. McNally and all the nursing staff. Funeral services will be held at 11:00 a.m. Saturday, Dec. 19, 2015 at Olson Funeral Home in Menomonie, with Pastor Bob Dahm officiating. Visitation will be from 10:00 a.m. until the time of the service at the funeral home. Burial will take place in Evergreen Cemetery in the Village of Colfax, following the service. “The little cares that fretted me, I lost them yesterday Among the fields above the sea, Among the winds at play, Among the lowing of the herds, The rustling of the trees. Among the singing of the birds, The humming of the bees. The foolish fears of what may happen, I cast them all away Among the clover-scented grass, Among the husking of the corn Where drowsy poppies nod, Where ill thoughts die and good are born, Out in the fields with God.” —Elizabeth Barrett Browning

Juel John Johnson, age 91, of Colfax, WI passed away Tuesday, Dec. 15, 2015 at The Neighbors of Dunn County in Menomonie, with his family by his side. He was born Oct. 17, 1924 in Colfax, WI to Arthur and Dina (Christianson) Johnson. Juel graduated... View Obituary & Service Information

The family of Juel John Johnson created this Life Tributes page to make it easy to share your memories.