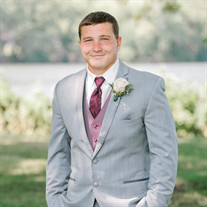 John C. Quinn V, age 24, of Elk Mound, WI passed away Sunday, January 3, 2021 in a single-vehicle car accident. He was born December 16, 1996 in Pipestone, MN to John C. Quinn IV, and Nancee C. Quinn (Croatt). He grew up in Arcadia, WI and graduated from Arcadia High School in 2015. John moved to Seattle, WA where he pursued Underwater Welding and received his Commercial Diving Diploma & Entry Level Diver Certification – from ADCI in February 2017. One of John’s greatest passions was football. He was an outstanding football player and played as both an Offensive and Defensive Lineman. He was dedicated to the sport and excelled earning him a spot on Varsity as a Sophomore. John was named a three time First Team All Conference player and Lineman of the year. John’s hard work and commitment presented him an opportunity to play on the Wisconsin Football Coaches Association All-Star Team in 2015. John was honored to be able to play his last football game in Oshkosh, WI representing Arcadia. John loved his family! You’d most often find him accompanied by his sidekick Lucy (German Shepard). John was one of three siblings; the four of them were referred to as the Fearsome Foursome. It didn’t matter whether he was on vacation, out to dinner, or simply chit chatting in a living room; John was happiest when he was with his family. John had many friends and found happiness in spending time with them. He enjoyed socializing with many of them through video games. John enjoyed the outdoors, specifically hunting, fishing, and swimming. John spent several years landscaping and enjoyed the challenges of physical labor. John was a quick learner and willing to try new things which presented him with an opportunity to work for a construction company. His work ethic and drive set him apart from others and he quickly excelled in his professional career. John is survived by his parents, John C. Quinn IV, and Nancee C. Quinn (Croatt), his sister Chelsi Q. Erbe (Jacob), his sister Kallie M. Robb (Bryan), his nephew Matthew B. Robb, his brother Luke Quinn, and loyal companion Lucy (German Shepard). He is also survived by many other relatives and friends. Visitation will be held from 10:00am to 12:00pm Saturday, January 9th at Holy Family Parish in Arcadia, WI. Funeral services will be held at 12:00pm following visitation. Psalms 23:4 Even though I walk through the valley of the shadow of death, I will fear no evil, for you are with me; your rod and your staff, they comfort me. https://www.gofundme.com/f/scholarship-fund-honoring-john-c-quinn-v

The family of John C. Quinn V created this Life Tributes page to make it easy to share your memories.