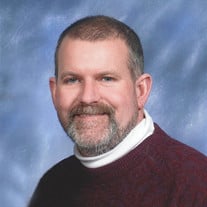 John Ward Merrimack, age 57, of Knapp, Wisconsin passed away on Wednesday, February 13, 2019 at his home after a battle with cancer. He was born March 11, 1961 in Moline, Illinois. He grew up in Menomonie, Wisconsin and graduated from Menomonie High School in 1979. John married Jodi Dunnum on September 10, 1994 at their residence in Elmwood. In his final years, he was the bakery manager at Dick’s Fresh Market. Prior to that position, he was employed at Loparex for 15 years and TMS Tire and Auto for many years. He enjoyed activities he could do outdoors which included fishing, snowmobiling, prairie dog hunting and discovering waterfalls with his wife. He had a passion for shooting firearms and reloading his ammunition. He loved animals especially his bulldogs. John will be remembered for his hardworking attitude. His family and friends knew they could count on him to lend a helping hand. John is survived by his loving wife, Jodi, his parents James and Pat Bade of Menomonie, three sisters; Marjorie (Steve) Slabey of Lake Hallie, WI, Kathy (Jon) Sonderup of Blair, NE, and Linda (Tom) Wendt of Menomonie, WI. He also has extended family including his mother-in-law, Joyce Dunnum of Owatonna, MN, and three sisters-in-law; Jerilyn (Greg) Kjellberg, of New Ulm, MN, Jana (Paul) Rushlow of Racine, WI and Jennifer (Lou) Garriga of Orange, TX as well as many nieces and nephews. He is preceded in death by his father-in-law, James Dunnum. Funeral services will be held at 1:00p.m. Thursday, February 21, 2019 at Our Savior’s Lutheran Church in Menomonie, WI officiated by Pastor Heather Wigdahl. Family will receive visitors at the church prior to the service from 11:00 – 1:00pm. Olson Funeral Home in Menomonie is serving the family. Family prefers memorials be given to either Our Savior’s Lutheran Church or Adoray Home Health and Hospice.

John Ward Merrimack, age 57, of Knapp, Wisconsin passed away on Wednesday, February 13, 2019 at his home after a battle with cancer. He was born March 11, 1961 in Moline, Illinois. He grew up in Menomonie, Wisconsin and graduated from Menomonie... View Obituary & Service Information

The family of John W. Merrimack created this Life Tributes page to make it easy to share your memories.