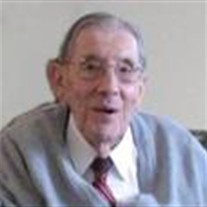 Colonel John Francis Mentzer (USMC Retired), age 95, of Eau Claire, Wisconsin passed away on June 11, 2015 at Luther Hospital in Eau Claire after a short illness. He was born in Brooklyn, New York on September 8, 1919, the last surviving child and son of the late John Kurtz Mentzer and Mary Elsie McKenrick Mentzer. He was preceded in death by his beloved wife of 59 years, Florence Fennimore Anderson Mentzer. In addition to his wife, Florence, he was preceded in death by both his sisters, Margaret Leavitt and Ellen Ironside; brother-in-law, Roderick Ironside; sisters-in-law, Lillian Boyle, Eileen Meyer, and Dorothy Anderson. He is survived by his two daughters, Jan Robinson (Robbie) of Wheeler, Wisconsin; Lynne McEvoy (Steven) of Raleigh, North Carolina; three grandchildren, Summer Robinson (Andrew Halbleib) of Eau Claire, Wisconsin; Jill Nash (Grant) of Boston, Massachusetts; and Andrea Mahar (Mark) of Apex, North Carolina; and one great-granddaughter, Brynn Mahar. He is also survived by numerous nieces, nephews, and two brothers-in-law. Col. Mentzer grew up in Brooklyn, New York. He attended Erasmus Hall High School and graduated from Pratt Institute of Science and Engineering in 1942 with a Bachelor’s Degree in Mechanical Engineering. He also met and married his wife, Florence, in Brooklyn. Col. Mentzer's distinguished military career spanned 28 years between May, 1942 and July, 1970. During this period, he served through multiple combat tours in World War II (Pacific Theater-1943 to 1945); the Korean War (1950 to 1951); and the Vietnam War (1966 to 1967). He participated in the invasion and seizure of the island of Iwo Jima (March, 1945), the post-war occupancy of Japan (1945 to 1947), and the withdrawal of American troops from the Choisin Reservoir (Korea), where he served under Col. Chesty Puller. During his military career he received seventeen medals including the Purple Heart (Iwo Jima), the Gallantry Cross Medal (Vietnam), two Bronze Stars (Iwo Jima and Korea), and the Meritorious Service Medal (1967 through 1970). Col Mentzer ended his career serving as G-4 of the 3rd Marine Division in Phu Bai (Vietnam 1967), followed by serving as Assistant Base Commander, Marine Corps Base, Camp Lejeune, N.C., before his retirement in July, 1970. After his retirement from the U.S. Marine Corps, Col. Mentzer served the City of Raleigh, North Carolina Housing Authority for 12 years until he finally retired in 1982. He kept busy even in retirement and enjoyed watching his Raleigh granddaughters, Jill and Andrea, grow up. He built a beautiful and extensive HO Model railroad layout, trains being another lifelong interest. He also enjoyed building miniature homes with his wife, Florence. He was the craftsman and she was the decorator. They built 5 main miniature homes, one for each of his daughters and one for each of his three granddaughters. He liked to design planting beds for the yard, and the home in Quail Hollow won Yard of the Month many times. He also loved building ship models, and before his death, he was going to start on the adult Lego model of the Imperial Hotel (Japan). He wrote more than 20 books for his family on family history, the Marine Corps, and all of his remembrances. Col. Mentzer moved to Menomonie, Wisconsin in 2006 after his wife passed away. He enjoyed exploring a new town and making friends. One of his favorite places was Lakeview Floral, where Lacy and all her staff had his weekly flower pickup ready each Friday. He liked the idea that at his age, he moved from the warm South to the cold Midwest. He lived at Village at White Pines in Menomonie and then later moved to Oakwood Hills Independent Living, and last, to Orchard Hills in Eau Claire. He was a life-long learner. He read extensively, listened to educational dvd’s which he purchased voraciously, loaded his MP-3 for books on tape, and enjoyed classical music and old movies. He was an expert on Marine history and the Civil War. He purchased a computer when he was in his late 80’s. His granddaughter, Summer, was his personal computer expert and teacher and helped him move his huge picture files to dvd as well as setting up files for all his various research. He tolerated, but did not approve of, extensive use of email. He was a member of the Dunn County Historical Society and was awarded Volunteer of the Year in 2009. Col. John F. Mentzer and his beloved wife, Florence, will have their ashes buried together at the Bellevue Cemetery in Gap, Pennsylvania, alongside his parents’ grave. A family memorial service will be held there in the fall.

The family of John F. Mentzer created this Life Tributes page to make it easy to share your memories.