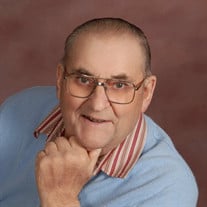 John Charles Fredrick Maves, age 89, of Elk Mound, WI, died peacefully on Sunday morning, October 5, 2014, at Neighbors of Dunn. John was born June 16, 1925 to Herbert and Dorothy (Luethe) Maves in Dunn County, WI. He grew up on the family farm in Elk Mound Township and graduated from Colfax High School. He married Lola Mae Marshall on July 28, 1945, they were married for 58 years. John and Lola began their married life together by taking over the family farm. Those were busy years, raising their five children, with John managing the farm and Lola teaching school. In those years neighboring farmers worked together and their growing families worked along side them. When John transitioned from dairy farming he worked first for Rusk Implement Dealership and later for Red Cedar Township doing snow plowing and road maintenance. In 1985 John and Lola moved to McGregor MN, to serve the Christian camping ministry of Big Sandy Camp, moving back to Elk Mound in 1990. John spent his retirement years surrounded by neighbors, friends, and family as well as the church family at Menomonie Alliance Church. John's faith in Christ was a vital part of his life. His conversion and resulting spiritual growth was evident to his family and all who knew him. His many prayers to God for his family were often accompanied by tenderhearted tears. He maintained an active interest in the spiritual progress of his family, his church, and the wider world, through missions and connections in the community of faith. After his conversion he became a faithful generous supporter of the purposes of God and the cause of Christ. John, through his example, left his children, grandchildren, and great grandchildren a spiritual legacy. John is survived by his five children, Donna Knipfer of Menomonie, Dennis (Marilyn) Maves of Elk Mound, Allen (Susan) Maves of Boyceville, Herb (Carolyn) Maves of Elk Mound, and Agnes (Larry) Wagner of Elk Mound; one sister, Hazel Brooke of Pottstown, Pennsylvania; 15 grandchildren, Ken (Jenny) Knipfer, Kim (Craig) Jentink, Jonathan (Rachael) Maves, JoAnna (Trevor) Cole, Joy (Aaron) Salvatore, Michelle (Ken) Graham, Amy (Tim) Moline, Aaron (April) Maves, Melony Maves, Steve (Rachel) Maves, Deb (Scott) Stanke, Kathy Maves, Nathan (Jodi) Wagner, Quentin (Paula) Wagner, and Tonya Wagner; 29 great grandchildren; other relatives and friends. He is preceded in death by his parents; his wife, Lola; brother, Paul Maves, sisters, Phyllis Pelzer and Correne Husby; son-in-law, Robert Knipfer; and grandson, Kris Knipfer. Funeral service will be held at 11:00 a.m. Friday, Oct. 10, 2014 at Menomonie Alliance Church with Pastor Doug Stolhand officiating. There will be visitation from 4:00 to 7:00 p.m. Thursday at Olson Funeral Home in Menomonie and at the church one hour prior to the service on Friday. Burial will be in Cedar Falls Cemetery in the Town of Red Cedar, Dunn Co. WI.

The family of John Maves created this Life Tributes page to make it easy to share your memories.