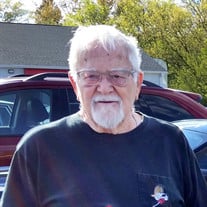 John E. ‘Jack’ Lampman, of Boyceville, WI passed away Thursday, January 17, 2019 after a valiant, 2 year battle with cancer. Dad was convinced that he wanted to write his own obituary, however there were always roads to be explored and people to visit with and time got away from him so it is left to us to share what a truly special person our dad was. Dad was not just a good dad, he was the BEST dad, from the time we were born until he passed into the arms of the God he loved so much. It didn’t matter if we were 5 or 50, he would respond if we needed help, love or support – or just a dumb comment to make us smile. He once said he didn’t care how old his kids were, as far as he was concerned they could move back in and live with him forever! Jack loved many, many things; God, his family, his country, his friends, cars, being busy, country & bluegrass music, bad but clean humor, western movies, chocolate, NCIS, Louis L`Amour, travel, trains, lighthouses and always, the great outdoors! Jack was born November 17, 1928 in Ladysmith, WI to Glen Lampman and Grace (Tromblay). He grew up in Ladysmith and by the age of 10 was already working hard delivering newspapers, he added farm labor to his resume by the age of 11. Both of these occupations, put a few pennies in his pocket and he got paid to be outside, where he was always happiest. He performed many jobs over the course of his life; milk hauler (via train!), woodsman, farmhand, soldier, mechanic, State of WI vehicle inspector, meter reader, Red Cross transfer and handyman. His most important occupations may have been husband and father, which we would say his investment was poorly compensated for and which he would strongly disagree with us on. Jack met Geraldine (Gerry) while working as a farmhand near Durand and they were wed in Ladysmith on April 4, 1959. They had 4 children. They enjoyed their home, children, grandchildren and traveling until Gerry’s health prevented her from enjoying some of this. Jack spent their remaining years together caring for her. Throughout this journey his Catholic faith was of great importance to Jack. He was a faithful and active member of St. Luke’s parish in Boyceville since 1976. He met many of his greatest friends through this congregation and we thank all of them for their friendship and support of dad through the years. Jack was diagnosed with his cancer very shortly after losing his wife. The next year and a half was spent trying to check off some bucket list items, both alone and with his family. There were train rides, light house tours, ferry rides, eagle observations, river cruises, train museums, Mackinac carriage rides and chainsaw carving shows! Not to mention two “senior moments”, the purchase of his prized Mustang convertible and the “platinum” F150, both of which led to many day tours on back country roads reliving his meter reading days. Jack did miss a few bucket list items: Reaching the 100 year milestone (darn cancer!), a helicopter ride, sky diving, seeing both the Pearl Harbor & DC monuments and taking Menley (COH), Shannon (Mayo Oncology) and Heather (Mayo Hospice) for a ride in his bright yellow Mustang this spring. Jack is survived by his three daughters and their husbands: Karen and Kenny Alfrey (Anderson, IN), Lori and John Hansen (Ham Lake, MN) and Julie and Drew Karnick (Blaine, MN). And one son and his wife: Tim and Selvi Lampman (Lee, NH). And eight grandchildren: Justin Alfrey, Ben Alfrey, David Karnick, Matt Karnick, Anna Lampman, Devin Lampman, Nikhila Lampman and Maya Lampman. Jack is predeceased by his wife: Geraldine ‘Gerry’ (Calhoun), his parents, Glen and Grace Lampman and two sisters, Gene and Renee Lampman. Special thank yous go to: Dr. Sandeep Basu and his wonderful oncology staff here in Menomonie. Your care and support went above and beyond expectations. Dad once said it was a good thing he got sick or he “may never have met all those nice people”. To Comforts of Home Assisted Living, also in Menomonie. The environment you provide to people who can no longer live independently is invaluable and we cannot thank you enough for making dad as happy and comfortable as possible in his last weeks. Our dad was truly, his son’s first hero and his daughters’ first love. Memorial Mass will be held at 11:00 a.m. Saturday, January 26, 2019 at St. Luke’s Catholic Church in Boyceville with Father Amir officiating. A luncheon will follow the service. Military Honors will be conducted by the Harmon-Harris American Legion Post #314. Visitation will be from 10:00 a.m. to 11:00 a.m. at the church. In lieu of flowers, memorials in John’s memory can be made to a charity of your choice.

John E. &#8216;Jack&#8217; Lampman, of Boyceville, WI passed away Thursday, January 17, 2019 after a valiant, 2 year battle with cancer. Dad was convinced that he wanted to write his own obituary, however there were always roads to be explored... View Obituary & Service Information

The family of John E. Lampman created this Life Tributes page to make it easy to share your memories.