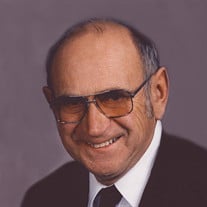 John E. Kosman, age 82 of Menomonie, WI passed away peacefully on May 30, 2016 at Luther Hospital in Eau Claire, WI while being surrounded by the many loved ones who gathered around him in his final days. He was born January 20, 1934 in Chicago to Maria & Andrew who were both born in Czechoslovakia. John graduated from Boyceville High School in 1952 & became a member of the United States Army during the Korean War where he was stationed in Panama and was honorably discharged In 1955. He worked at Elmwood Creamery then started his own milk route business that he had for 29 years. He drove school bus for 15 years, and worked at Wieser Concrete. John was a lifetime member of the VFW & served as Commander of the Menomonie Post 1039 for many years. He also served two terms as District Commander. It was through the VFW that John met the love of his life Helen Selvig. The two were united in marriage on December 1, 1973 at Peace Lutheran Church in Menomonie, WI. This December they would have celebrated their 43rd wedding anniversary. John & Helen were blessed with the love of many friends and family. They enjoyed camping where the grandkids and family would come and spend nights with them. John loved all sports and was an avid Green Bay Packer fan. John was a member of Peace Lutheran Church and served on the church council. John also spent time at horse shows with his daughter Linda. In 1999 Johns heart gave out and he became a recipient for a heart transplant that he was blessed to receive in October of 1999. We are very grateful to the donor family who our family continues to have a relationship with. On May 17, 2014 John was honored to be a part of the Freedom Honor Flight where they flew to Washington DC to view all of the war memorials. John was very excited to get the call to be chosen. John is survived by his wife Helen, a daughter Linda Gil, two step-daughters, JoAnn (Greg) Akenson, Patty (friend Mike Kalisz) Kurtzhals, two step-sons, Jim (Debbie) Selvig, Larry (Ann) Selvig, grandson, Brandon (Andy), 11 step-grandchildren, Missy (Mark), Sara (Mike), Kris, Angie (Billy), Timmy, Jennifer (Tim), Brooke (Jon), Matt (Jessie), Heidi (Josh), Bethany (Josh), 23 step-great grandchildren, Samantha (Jordon), Austin (Allysha), Tristin, Destiny, Shianne (Taylor), Dakota, twins Ean & Ender, Lyric, Addy, Alayna, Hailee, Bronson, Lexi, Brayden, Boadi, Danie, Kaylee, Cade, Bryce, Molly, Jack & Elliot, 2 step-great-great grandchildren, Elijah, Connor. He is further survived by a sister, Irene (John) Klatt, a sister-in-law, Edith Kosman, a brother-in-law, George Sparks as well as several nieces, nephews & cousins. He was preceded in death by his parents Maria & Andrew, a son, Brian Kosman, a brother, Wally Kosman, 2 sisters, Olga Sparks & Vera Turchany. Funeral services will be held at 11:00 a.m. Thursday, June 2, 2016 at Peace Lutheran Church in Menomonie with Pastor Kristine Stedje officiating. Military Honors will be conducted by the Menomonie Veterans Honor Guard. There will be a visitation from 9:00 a.m. until 11:00 a.m. at the church. Burial will take place at Wayside Cemetery in Barron at a later date. A special thank you to Pastor Kristine who went above and beyond for her visits, prayers and support for our family during this time, along with the EMS who responded so quickly and the many staff at MCHS-Luther who took such great care of him.

John E. Kosman, age 82 of Menomonie, WI passed away peacefully on May 30, 2016 at Luther Hospital in Eau Claire, WI while being surrounded by the many loved ones who gathered around him in his final days. He was born January 20, 1934 in Chicago... View Obituary & Service Information

The family of John Kosman created this Life Tributes page to make it easy to share your memories.