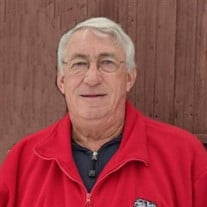 John “Scott” Kingzett, 73, of Menomonie, WI, passed away peacefully Thursday, November 12, 2020 at Mayo La Crosse due to complications from COVID-19. Scott was born May 26, 1947 in Duluth, MN to William and Virginia Kingzett. He graduated from East Troy High School in 1965. Scott attended UW-Stout from 1965-1969 majoring in Industrial Education. While at Stout, he played football lettering all four years and was part of the 1965 Conference Championship Team. On August 10, 1968 he married Jane Ritchie in Cumberland, WI. In the fall of 1969, Scott was drafted into the United States Marine Corp serving from 1969-1971. On April 1, 1971 their daughter Julie was born at Camp LeJeune, North Carolina. During his time in the Marine Corp, he earned the honor of Marine of the Month and reached the rank of Sergeant. Scott worked for Charter Communications for 38 years and was a Platoon Leader for the Paid on Call Firefighters for 28 years. In 2012, he was awarded the Jack Ganzemiller Distinguished Service Award for Courage, Leadership, Dedication and Mentor. In his free time, he was an avid reader, never missed a Packer, Badger or Brewer game and during the summer he volunteered at the Colfax Railroad Museum. Scott also enjoyed spending time with his grandchildren. Jane and Scott loved taking road trips and had the opportunity to visit all 50 states. On their travels, they rode a stream train wherever they could find one. Scott is survived by his loving wife Jane of 52 years, his daughter Julie (Tom Lawrence), a brother Gary of Cresskill, NY, a sister Susan (Dr Michael) McFarlane of Oshkosh; two grandchildren, Alexander and Addysen Farrell and a brother-in-Law Jerry (Sue) Ritchie of Sussex, WI. Scott is preceded in death by his parents, William and Virginia Kingzett, in-laws, Frank and Dola Ritchie, and sister-in-law Mary Kingzett. Scott’s family wants to thank the staff at Mayo Menomonie and the ICU Mayo La Crosse for the outstanding care he received while battling COVID. A Private service and burial will be at the Northern Wisconsin Veterans Cemetery. Olson Funeral Home in Menomonie is serving the family. In lieu of flowers memorials can be made to Our Saviors Lutheran Church (Outdoor Sign) or the Colfax Railroad Museum.

The family of John Scott Kingzett created this Life Tributes page to make it easy to share your memories.