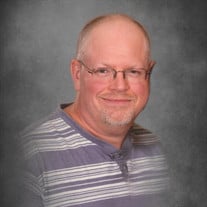 Joel Allen Bradshaw, age 47 of Menomonie, WI, formerly of Moorhead, MN passed away unexpectedly on Monday, Aug. 23, 2021 at his home. Joel was born June 20, 1974, to Patricia Bradshaw and Joseph Meloche in Kirksville, MO. He grew up in Red Lake Falls, MN and graduated from Lafayette High School in 1993. Joel attended and graduated in1998 from Northland Community Technical College in Thief River Falls, MN with a degree in Aviation Maintenance Technology. He worked for Mesaba Airlines and then Northwest airlines in MSP for 10 years as a licensed airframe & powerplant mechanic. Joel married Christine Manning in 2000 and lived in Faribault, MN with their Bassett hound and wiener dogs. They moved to Fargo, ND and later divorced in 2011. Joel and Heidi found each other on match.com and were united in marriage September 28, 2013 at First Lutheran Church in Fargo, ND. They made their home in Moorhead, MN with their 4 dogs, a bassett hound, a wiener dog, a maltese and teacup poodle. With only 1 dog remaining, they moved to Menomonie to be closer to his in-laws that resided in Black River Falls, WI. Joel started in 2017, working industrial maintenance at Menards distribution center in Eau Claire, WI. Soon after a position opened in Aviation Maintenance, he transferred to the flight department at Menards. "Wrenching on planes" was his passion and forte. From a young age, he learned about hunting, guns and the great outdoors. Joel had an incredible memory for quoting and collecting movies, 80s rock music and WWII naval battleship history. He enjoyed building and painting model planes and ships. Most recently he enjoyed Christian music. He cherished vacations to Lake Superior, and he always said, it was "God’s country". With his most recent trip to Bayfield, WI. Joel was a huge fan of college hockey and cheered for UND Fighting Sioux in Grand Forks, ND. He also enjoyed IndyCar races and traveled to Road America in Elkhart Lake, WI, as well as Toronto, Indianapolis, St. Petersburg and Texas. Joel, may you rest in peace and our beloved, cherished memories of you be blessed. You brought so much joy and laughter to everyone who met you and those who loved you. Joel is survived by his wife Heidi of Menomonie, his mom Patricia Briggs of Warren, MN, grandpa Joseph Bauer of Red Lake Falls, MN, in-laws Alvin and Gwyn Knutson, sister-in-law Karen Knutson, brother-in-law Blaine Knutson of Black River Falls, WI, several aunts, uncles, cousins, step-sisters and step-brothers. Joel was a grateful friend of Bill W. He was preceded in death by his uncle Randy Bradshaw, uncle Mark Bradshaw, grandmother Patricia Bauer, father Joseph Meloche, stepfather Eddie Briggs, grandfather John Kenneth Bradshaw. A Memorial Service will be held at 11:00 a.m. Monday, Aug. 30, 2021, at Christ Lutheran Church in Menomonie. There will be visitation at the church one hour prior to the service. Olson Funeral Home in Menomonie is serving the family. A Committal Service will be held at 2:00 p.m. on October 2, 2021 at First Lutheran Church, Fargo North Dakota.

Joel Allen Bradshaw, age 47 of Menomonie, WI, formerly of Moorhead, MN passed away unexpectedly on Monday, Aug. 23, 2021 at his home. Joel was born June 20, 1974, to Patricia Bradshaw and Joseph Meloche in Kirksville, MO. He grew up in Red... View Obituary & Service Information

The family of Joel A. Bradshaw created this Life Tributes page to make it easy to share your memories.