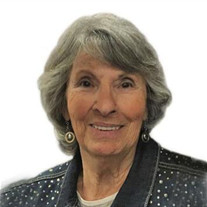 Joan Ellen Wyss, 75, passed away suddenly on July 3rd, 2019 from ongoing heart complications. Joan was born August 8th, 1943 in Menomonie, Wisconsin to Lois and Frank Larson. She attended Menomonie Senior High School until her senior year when she and her mom moved to Minneapolis where she graduated. She and her Mother later returned to Menomonie. As a young thirteen-year-old, she met a handsome young teen from Boyceville, Wisconsin, Richard Wyss. They married on November 28th, 1964. Their early marriage involved several moves until they settled where they would raise their family on a dairy farm in Knapp, Wisconsin. Joan’s sole purpose in life was motherhood. She loved making a house a home by fully remodeling their big farmhouse to make it a place her family would call home. She raised her five children with dedication. She made sure that holiday traditions were upheld and special. She cooked and canned, spruced, planted, mowed and beautified their farm, making it a truly unique and special place. She’d spend winters freezing her thumbs with the garden hose, flooding the front yard to make an ice-skating rink. Hardworking, handy and committed to her family and home – she did it all. During the 1990’s, Joan and Richard ventured to Destin, Florida. Together, they built a business and home where their family could come enjoy time in their pool and at the beach. She loved the sun, white sand and warmth – but Wisconsin called them back. They built a home perched on a hill in Downing, where she lived until her passing. As her kids grew and had children of their own, the “farm” became the grandkids’ place where they created fond memories of holidays at Nana’s. No matter how much she was encouraged to “dial it back” and simplify, she always made the tables beautiful and the day special. Every one of her children and grandchildren knew that she was proud of them and loved. Strong in her faith, she raised God-fearing children. In good times and especially in the difficult ones, she trusted God’s plan. She found peace in Him at the passing of her son, Rob in 2013 and expressed many times that she did not fear dying, because she knew where she was going. Joan is survived by her husband of 54 years, Richard Wyss, daughters Kathy (Jack) Elliott, Laura (Brian) Bergman, Sarah (Eric) Tostrud, and Tammie (Cory) Amundson, grandchildren Madison and Lauren Elliott, Ben and Will Bergman, Claire and Garrett Hockman, Alex Tostrud, and Kaylyn, Colton, Calvin and Greysen Amundson, daughter-in-law Kelly Wyss and a sister, Joyce Neubauer. She is preceded in death by her Mother, Lois Larson, Father, Francis Larson, and son Robert Wyss. Funeral services will be held at 2:00 p.m. Monday, July 8th, 2019 at Immanuel Lutheran Church, 2526 80th Ave. Woodville, WI 54028 with Pastor Wayne Hilgendorf officiating. Burial to follow at St. Paul’s Lutheran Cemetery, Menomonie, Wisconsin. Dessert and coffee will be served. A visitation will be held at Olson Funeral Home in Menomonie, Wisconsin Sunday, July 7th, 2019 from 4:00 – 7:30 pm. and one hour prior to the service on Monday at the church.

The family of Joan E Wyss created this Life Tributes page to make it easy to share your memories.