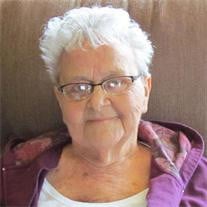 Joan Mable Branch, age 77 of Eau Galle, passed away at home on Saturday, September 21, 2013 surrounded by family. She was born October 26, 1935 in Louisville, Dunn County, Wisconsin to Emery and Helen (Creaser) Langland. Joan was baptized and confirmed at Louisville Lutheran Church. She attended Louisville rural school and went on to graduate from Durand High School. Joan continued her education at Normal Teaching School and graduated in 1953. She then taught at rural county one room schools such as Shady Lawn and Louisville schools, and then at Downsville Elementary before going to the Prescott School District, where she retired in 1992 after having taught for forty-three years. Joan's care and concern for children was evident as she taught Title One Students for many years and also drove bus for special needs children. On August 2, 1958, Joan was united in marriage to Stanley Paul Branch at New Hope Lutheran Church in Downsville. After her retirement, Joan and Stanley made their home on their Eau Galle farm. She and Stanley traveled with family and friends touring almost every state. She especially enjoyed their bus trips from Greg Preusse Bus Tours of Menomonie. Joan liked baking, making crafts and attended many craft shows. She was a member of The Caddie Woodlawn Homemakers until her death and was very devoted to her church and church functions at New Hope Lutheran Church in Downsville. Most of all, Joan loved taking care of her grandchildren and spending time with them. Joan is survived by three children, Jeffrey (Patricia) Branch of Eau Galle, Annette (Randall) Huppert of Menomonie and Paula (Thomas) McClelland of Knapp; twelve grandchildren; four great-grandchildren; other relatives and many friends. She was preceded in death by her parents, Emery and Helen Langland; her husband, Stanley (1999); one grandson, Phillip Huppert; one brother, Leland Langland; and one sister, Alma Schmutz. Funeral Services will at 11:00 a.m. on Saturday, September 28, 2013 at New Hope Lutheran Church in Downsville, WI with Pastor Dale Moe officiating. Visitation will be from 4:00 p.m. – 8:00 p.m. on Friday, September 27, 2013 at Olson Funeral Home in Menomonie and also one hour prior to the service at the church on Saturday. Burial will follow the service at Clear View Cemetery in Eau Galle, WI Olson Funeral Home of Menomonie is serving the family.

Joan Mable Branch, age 77 of Eau Galle, passed away at home on Saturday, September 21, 2013 surrounded by family. She was born October 26, 1935 in Louisville, Dunn County, Wisconsin to Emery and Helen (Creaser) Langland. Joan was baptized and... View Obituary & Service Information

The family of Joan M. Branch Obituary created this Life Tributes page to make it easy to share your memories.

Joan Mable Branch, age 77 of Eau Galle, passed away at home on...