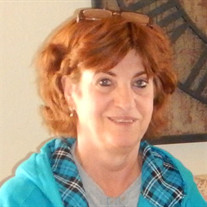 Jo A. (Myers)*(Stai) Palmer, Boyceville, passed away on Wednesday, Oct. 14, 2015 at Mayo Clinic Health System – Eau Claire. Jo was born to Joseph & Ardythe (Stansbury) Myers on November 18, 1950, in Milwaukee, Wisconsin. Returning to the Boyceville area in 1956, Jo was a lifelong resident of Boyceville. She attended Boyceville Elementary School and graduated from Boyceville High School. Jo also attended Chippewa Valley Technical College in Eau Claire. Jo was married to Robert Stai of Menomonie from 1971 through 1978, and they had two sons, Joseph and Kerry. Jo was later married to Mark Palmer of Boyceville from 1986 through 1994. Jo worked for the West Central Education Association in Menomonie until January, 2013; served on the Village Board in Boyceville in 1987-89 and 2003-2004 and 2014 to present, plus was active on the Community Action Club for over 20 years. Jo was preceded in death by her father Joseph Myers in 1979, her sister and best friend Roberta Mounce in 2007, her mother Ardythe Laberee in 2008, and stepfather Dave Laberee along with her maternal and paternal grandparents. Jo is survived by son Joseph Stai of Wausau, grandchildren Joey and Justin; and son Kerry Stai (Adrianne) of Watertown, grandchildren Cutler, Savannah and Reese. She is further survived by her sister Teresa (Keith) Geurkink of Colfax; brother-in-law Dale Mounce of Boyceville; and, nephews and nieces, Thomas Mounce (and great nieces Mary and Maggie) of Boyceville, Pamela Mounce (and great-nephew Bradley) of Boyceville, Brett Swenson of Park Falls, and Bobbie (Jim) Turco (and great-nephew Jordan) of Chicago. A Memorial Service will be held at 12:00 p.m. (noon) on Monday, Oct. 19, 2015 at Trinity Lutheran Church in Boyceville, WI with Pastor Brad Peterson officiating. There will be visitation at the church from 10:00 a.m. until the time of the service on Monday. Burial will be in Tiffany Cemetery in Boyceville. Olson Funeral Home in Menomonie is serving the family.

The family of Jo Ann Palmer created this Life Tributes page to make it easy to share your memories.

Jo A. (Myers)*(Stai) Palmer, Boyceville, passed away on Wednesday,...