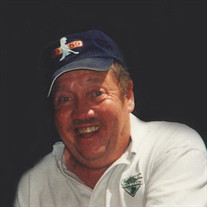 James Edward “P” May, age 78, of Menomonie, WI passed away Monday, March 29, 2021 at The Neighbors of Dunn County in Menomonie after a two-year battle with cancer. He was born Jan. 19, 1943 in Chicago, IL to Marshall and Virginia (Gilchrist) May. He graduated from Lane Tech High School in Chicago in 1961. Jim was then drafted into the U.S. Army in 1963, where he spent his last 13 months serving in South Korea and was honorably discharged in 1966. He was a member of the 1st Armed Division Artillery and earned the rank of Sergeant E-5. He was a lifetime member of the Chetek American Legion and was very proud of his military record. After his military service, Jim returned to Chicago, where he sold John Hancock Insurance for 18 years, before opening “Popeye’s Pub” on the corner of Cicero and Addison in Chicago. After selling Popeye’s Pub he moved his parents and himself to Menomonie. He then worked parttime as a bartender, served warrants, rangered at golf courses and enjoyed selling golf equipment at Nevada Bob’s in Eau Claire for Lance Ystebro. “P” was an avid Chicago sports fan, Cubs, Sox, Bears, and his favorite Blackhawks when winning!!! When losing? He was also an avid and very competitive bowler and golfer, participating in many leagues and tournaments. He loved to win and hated to lose! “P” had a passion for playing “Pac Man” and the slot machines. He will be remembered for his joke telling, tagging nicknames on people, Fatty, Rube, Double F, along with his P-ism’s. Jim would like to thank the staff at The Neighbors of Dunn County, V.A. Medical Center of Minneapolis, and St. Croix Hospice. And a special thanks to St. Croix Hospice nurse Gina and Chaplain Karl, V.A. Oncologist Dr. Luikart, Mayo Clinic Health System- Menomonie Dr. Joe Heimler. Also “Donald J. Trump” for all he has done for the veterans. Jim is survived by his aunt Arla and her family and other cousins and their families. He was preceded in death by his parents Marshall and Virginia May; his beloved dogs, Skip, and Jodi; his best friends, Mike Benning of Chetek, and Steve “Pudge” Krueger. Jim’s urn was designed, built, and donated by his friend Gail Skamfer. Honorary Pall Bearers will be Steve May, Jeff Fizel, Jerry Fizel, Kevin Dusso, Jeff Marson, Randy Miller, Bill Richartz and Ron Micek. Memorial donations may be made to the Dunn County Humane Society or Menomonie Youth Hockey. There will be a Celebration of Life for Jim on Wednesday, May 19, 2021 from 9:00 a.m. to 11:00 a.m. with a prayer service at 10:45 a.m. at Olson Funeral Home in Menomonie. A private burial will be held at Christ Lutheran Halvorson Cemetery with military honors by Menomonie Veterans Honor Guard. The celebration will continue at Whitetail Golf Course (715-962-3888) with a nine-hole golf outing and eats, raising funds for the Dunn County Humane Society and Menomonie Youth Hockey.

The family of Jim "Da-P" May created this Life Tributes page to make it easy to share your memories.