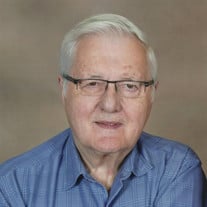 Jerry Clark Smith, passed away Thursday, January 16, at Mayo Clinic/Luther Hospital in Eau Claire surrounded by his family. Born January 27, 1937 in Menomonie to Clark and Flora (Kunz) Smith, Jerry graduated from Menomonie High School in 1954 and served in the 128th Infantry, A Company in the U.S. Army. He married Jane Halverson September 11, 1965. Jerry worked at Halverson Bros. Plumbing for over 30 years and didn’t slow down in retirement, being heavily involved in the Christ Lutheran Church family, being an active member of the community, as well as fulfilling the “key keeper” role at the Village at White Pine Senior Living Community. Jerry is survived by his wife, Jane; sons, Greg (Beth) Smith of Eagan, MN, and Ryan (Karen) Smith of Minneapolis, MN.; grandchildren, Samantha, Lauren, and Calvin; brother, Dean (Shirley) Smith of Wauwatosa WI; brother-in-law, Ron (Maureen) Halverson of Cold Spring, MN; nephews Jason Halverson, Jeff (Laura) Smith, Steve (Priscilla) Smith; niece Susan Smith and other relatives and many, many friends. Jerry was preceded in death by his parents. The family would like to thank the staff at Mayo Clinic/Luther Hospital for all the kindness and support during the past few weeks. Funeral services will be held at 2 p.m. Saturday, January 25, 2020, at Christ Lutheran Church in Menomonie, with Pastor Randy Skow-Anderson officiating. There will be visitation from 4 to 7 p.m. Friday, January 24, 2020, at Olson Funeral Home in Menomonie and one hour prior to the service at the church. Burial will be in Rose Hill Cemetery in the Town of Dunn at a later date.

The family of Jerry C. Smith created this Life Tributes page to make it easy to share your memories.