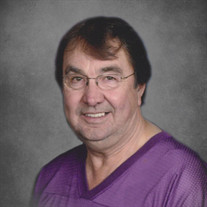 Jerome “Jerry” Wyss of Boyceville WI left us unexpectedly after a short stay at the Red Cedar Mayo Clinic Health System in Menomonie WI on November 25th, 2019. Jerome Rhinhart Wyss was born on the original Wyss family farm to Rhinhart and Alice (Olson) Wyss on January 12th, 1946 just south of Boyceville WI. He attended grade school at Granger country school and graduated from Boyceville High School in 1964. He was confirmed at St. John’s Lutheran Church in Boyceville and was involved in sports and FFA while attending school. Jerry married Ardis Harvey and together they raised two sons Scott Duane and Jason Thomas. During these early years Jerry enjoyed racing cars, snowmobiling, farming and later driving semi-truck and working at the Beskar Bean Plant. He was always lending a helpful hand and finding good in all people he met. Later, he married Melissa McCarthy and together they also raised two sons Matthew Wayne and Noah Jerome. He was always so proud of his boys! In his later years he enjoyed taking the kids to garden tractor pulls and then watching the boys pull with his “Alice” Chalmers garden puller. Jerry had a passion for life and cared very deeply for his family and friends. He was the kind of person that would give his last dollar away if it meant it would help someone in need. He was a kind soul. He enjoyed vacations to Hawaii and several all-inclusive trips to the Dominican Republic and Mexico with family and friends. He even had a mural painted in his home of a tropical paradise scenery which he was very proud to have commissioned. Most people who knew Jerry recognized he had a fabulous sense of humor. He was always quick to remark about something funny when the timing was right and always with a smile on his face. In recent years, he really enjoyed his “coffee clutch clan” at Cenex and the staff there treated him like a family member which was much appreciated. He will be missed by many but never forgotten. Jerome R. Wyss is preceded in death by his parents Rhinhart and Alice Wyss; two brothers-in law Foy Lowery and Keith Oliver and his beloved son Jason T. Wyss. He is survived by his children Scott (Joy) Wyss (Boyceville, WI); Matthew (Tiffany) Wyss (Connersville, WI) and Noah Wyss (Boyceville, WI). He is also survived by three sisters Judy (Albuquerque, NM); Bonnie Oliver (Colfax, WI) and Sharon (Glen) Harke (Anoka, MN) and one brother Carrol (Sharon) Wyss (Boyceville, WI); one God daughter Allison Harke and one God son Jake Wyss; two granddaughters Kerstain (Joe) Oestreich (Boyceville, WI) and Katrina Marx (Boyceville, WI) as well as one great grand-daughter Kendra Oestreich. Jerry is also survived by many other family members, nieces, nephews, cousins and many special friends. A celebration of life will take place on January 11th, 2020 at the Trinity Lutheran Church in Boyceville WI at 11am with visitation at the church two hours prior to the service. Arrangements are provided by Olson Funeral Home in Menomonie with Pastor Brad Peterson of Trinity Lutheran Church officiating.

The family of Jerome "Jerry" Wyss created this Life Tributes page to make it easy to share your memories.

Jerome “Jerry” Wyss of Boyceville WI left us unexpectedly after...