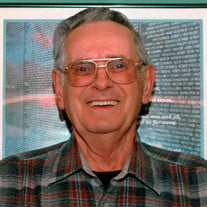 Jerome Peter “Jerry” Jalowitz, 78, of Cedar Falls, Dunn County, died on Wednesday, 10 December 2014 in his home. He had lived in Cedar Falls since 1968. Jerry was born to Stanley and Elizabeth Jalowitz on May 14, 1937 in rural Hayward, WI. After attending the Round Lake Elementary School and graduating from Hayward High in 1955, he joined the Army National Guard as well as finding employment with Northern States Power Company (now Xcel Energy). He completed several enlistments in the Guards in 1965, when he was honorably discharged. Working for NSP took Jerry to Chippewa Falls where he married Karen Blakey on September 25, 1965. They moved to Cedar Falls in 1968 when he became a meter reader in NSP’s Menomonie office. He and his trademark red hat would be a fixture in the Menomonie area until his retirement in 1993. Over the years, his greatest avocation was the game of dartball. He played in leagues based in Menomonie, Eau Claire, and Colfax, as well as in tournaments throughout the state of Wisconsin. In 2012, he was inducted into the Wisconsin Dartball Hall of Fame for his services to the game as a player, team captain, league president, and equipment dealer. In his later years, he devoted much time and money to the support of his fellow Veterans. He became a leader in local Veterans organizations. He was preceded in death by his parents Stanley in 1994 and Elizabeth in 1996, his wife Karen in 1996. He is survived by two children, Alan of Menomonie and Lisa (Mike) Wenholz of Eau Claire; two sisters, Betty Ann Green of Hayward and Kitty Leithen of Boise, ID, those with whom he played beanbags and countless friends in the dartball world and the Veterans community. A Time of Remembrance will be held at 6:00 p.m. on Friday, December 19, 2014 at Olson Funeral Home in Menomonie with military honors by the Menomonie Veterans Honor Guard. Family and friends will gather from 4:00 to 6:00 p.m. prior to the time of remembrance. The family suggests memorials to the Wounded Warrior Project, P.O. Box 758517, Topeka, KS 66675; or www.woundedwarriorproject.org

The family of Jerome Peter Jalowitz created this Life Tributes page to make it easy to share your memories.