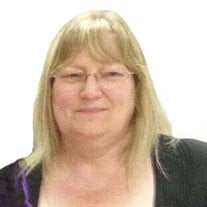 Jena Dawn Anderson, of Boyceville, passed away unexpectedly Monday, February 12, 2018. Jena was born July 28, 1963, in Eau Claire, a daughter of Kenneth Hintzman and LeAnn Mork. She was united in marriage to Ron Anderson on December 13, 1984, in Menomonie. Jena graduated from Colfax High School in the class of 1981. She attended Chippewa Valley Technical School for Accounting and later went back to school to become a Certified Nursing Assistant. She was most recently employed as a CNA at The Neighbors of Dunn County. Jena was a wonderful mother, wife, daughter, sister and friend. She was caring, generous and always available to offer a helping hand. Jena spent most of her summers up north, camping and fishing on Lake Sissabagama. She enjoyed the simple things in life; cooking, crafting, and spending time with family. She especially cherished her new role as a grandmother and spending time with her grandson, William. Jena is survived by her parents, Kenneth Hintzman and LeAnn Mork; husband, Ron Anderson; three children, Holly, Charles (Lindsey), and Kallie Anderson; one grandson, William Anderson; five siblings, Luann Larson (Steve), Jeffrey Hintzman, Kerry Hintzman, Derek Hintzman, and Bridget Winsand (Wayne); one brother-in-law, Tor Anderson (Debbie); and numerous nieces, nephews, cousins and friends. She was preceded in death by her father-in-law, Charles Anderson; mother-in-law, Joan Anderson; and sister-in-law, Kim Anderson. In keeping with the wishes of Jena, there will be no traditional funeral service. However, a celebration of life will be held at a later date, details forthcoming. Family and friends are welcome. Olson Funeral Home in Menomonie is serving the family.

Jena Dawn Anderson, of Boyceville, passed away unexpectedly Monday, February 12, 2018. Jena was born July 28, 1963, in Eau Claire, a daughter of Kenneth Hintzman and LeAnn Mork. She was united in marriage to Ron Anderson on December 13, 1984,... View Obituary & Service Information

The family of Jena D. Anderson created this Life Tributes page to make it easy to share your memories.