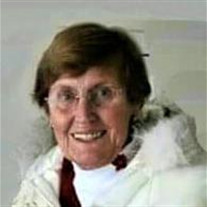 Jean Spanks of Menomonie, WI passed away peacefully on October 30, 2019. She will be remembered fondly for her joyous laughter and bountiful sense of humor. Jean was born in Algoma, WI on June 3, 1940. While in school, she developed a love of the flute and music. She graduated from the University of Wisconsin Oshkosh in 1962 with a degree in Elementary Education. She taught for several years in Manitowoc and Cudahy, WI and eventually worked for the Department of Defense teaching overseas. While living in Japan, she met her husband, Alan. They were married on May 17, 1967 in Tokyo, Japan. With the impending birth of their first child Sean, Jean and Al moved to Wisconsin, living in Green Bay, Appleton and Menomonie. Throughout her life, Jean had a love of teaching, and touched the lives of many of her students and colleagues. Jean was a devoted mother and stayed at home raising her children. When her children were grown, she returned to teaching in Menomonie, WI. After retirement, Al and Jean enjoyed spending time “Up North” at their cottage and travelling. Jean also loved to read, garden and spend time with her family, friends and cats. Jean was preceded in death by her husband Alan of Menomonie, WI and son Sean of McAllen, TX, her parents Clarence and Mildred Lafond, her brother James LaFond, her grandparents Clarence and Anna Toebe, and aunt Iris Johnson, all of Algoma, WI. Also preceding her in death was her beloved mentor Richard “Dick” Radtke of Algoma, WI. Jean is survived by her daughter Jamie Spanks, son-in-law Sean Nagel and grandchildren Peter and Catherine “Kit” Nagel of Eagan, MN. She is survived by nephew Marty (Sherry) LaFond and sister-in-law Mary Ann LaFond of Algoma, WI, and cousin Joyce (Bob) Van Oss of Chicago, IL. Jean had many beloved friends who will remember her with love, including Irene and Val Radtke of Algoma, WI, Paul Radtke of Crivitz, WI, Barb Nelson and the Fidelis Street Families of Appleton, WI, and Heidi Karrmann and adopted grandchildren Jacob and Jenna Karrmann of Menomonie, WI. A private interment will be held at the Evergreen Cemetery Algoma, WI at a later date.

Jean Spanks of Menomonie, WI passed away peacefully on October 30, 2019. She will be remembered fondly for her joyous laughter and bountiful sense of humor. Jean was born in Algoma, WI on June 3, 1940. While in school, she developed a love... View Obituary & Service Information

The family of Jean Ann Spanks created this Life Tributes page to make it easy to share your memories.

Jean Spanks of Menomonie, WI passed away peacefully on October...