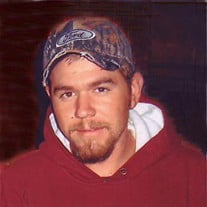 Jared S. Braget, age 33, of Boyceville, WI died Friday, Mar. 18, 2016, the result of an automobile accident. He was born Nov. 27, 1982 in Olympia, WA to Jelaine Braget and Jack Morgan. Jared moved to Wheeler, WI in 1994. He worked as a commercial roofer from 2000 to 2013. Jared enjoyed spending time with his daughter and with friends. He also loved fishing, working on cars, demolition derby’s, mud bogging and snowmobiling. Jared is survived by his daughter, Naomie and her mother Lexie Razmus; his father Jack Morgan; a sister Jennifer (Jacob) McReynolds, a brother Jason Quantz; grandmothers, Phyllis Braget and Diane Morgan. He will also be missed by lifelong friends, Dan Fregine, Ricky (Jessica) Hoffman, Rick (Debrah) Hoffman and Tim (Clara) Peterson as well as many other friends, too numerous to mention. He was preceded in death by his mother Jelaine Braget and grandfather Leon Braget. Our dear Jared, your time with us was short, but our memories of you will last forever. You will always be in our hearts and never forgotten. A Celebration of Jared’s life will be held from 4:00 to 7:00 p.m. on Wednesday, March 23, 2016 at Wheeler Inn, in Wheeler, WI.

The family of Jared S. Braget created this Life Tributes page to make it easy to share your memories.