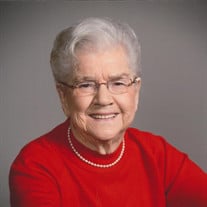 Janet (Barnes) Wendt, age 91, passed away on January 27, 2021. Janet was born on March 20, 1929, early in the morning on a farm near Spring Valley WI to Charles Barnes and Esther (Bernard) Barnes. Because the doctor did not arrive in time for birth, Janet was delivered by her mother, and she was already half-an-hour old when the doctor arrived at the farm. Janet attended Louisville grade school and Durand and Menomonie High Schools. She graduated from Menomonie Highschool, class of 1946. Janet married Roy Wendt on January 25, 1947 and farmed for most of her life with her husband. Their great pride was the Polled Hereford beef cattle that they raised. Janet loved the farm, especially the animals. Over the years, she nursed many sick animals back to health. She always raised a large garden, canning and freezing the produce, and growing many beautiful flowers. Janet also worked outside the home for 25 years as a housekeeper at Memorial Hospital and Nursing Home from 1966 to 1973 and then at the Dunn County Health Care Center from 1973 to 1991. Through her work, she made many new friends with the residents’ families and with her co-workers. She was a beef leader for 20 years with Little Elk Creek 4-H Club and a member of the Pollettes Beef Association. She was a member of the Wilson Street Homemakers for 27 years and the Homemakers HCE for 15 years. Janet was also a member of Our Savior’s Lutheran Church for over 60 years. She helped at church when needed and was a member of the Priscilla and Angel Circles as well as the stewardship committee for two years. In her spare time, Janet loved fishing, was an avid walker, and attended aquacise. She enjoyed bird watching and loved nature in general. In her younger years, Janet loved horses and loved to ride. Janet also loved the Green Bay Packers and Wisconsin football. And she loved to bake and to entertain. But Janet’s greatest love was her children, grandchildren, and great-grandchildren. Janet is survived by one son and three daughters: Vicki (David) Casper of Knapp; Michael (Jeanne) Wendt of Menomonie; Beckie Ferber of Eau Claire; and Lisa (Patrick) Phelps of Bellaire, Texas. She is also survived by 10 grandchildren, 16 great-grandchildren, her sister-in-law, Carol Wendt, of Menomonie, many nieces and nephews, and extended family, Cindy (Hillman) Larsen of Colfax and Kathy (Hillman) Wagner of Bolton, Massachusetts. She was preceded in death by her husband, Roy; parents, Charles, and Esther Barnes; brothers, Cyril Barnes and Duane Barnes; sisters-in-law, Mildred (Martinson) Barnes, Virginia (Prothero) Barnes, and Lynette (Wendt) Marshall; brothers-in-law, Allen Wendt, Marvin Wendt, and Clifford Wendt; and special friend, Lionel Hillman. Visitation will be held Monday, February 1, 2021 from 4:00-7:00 p.m. at Olson Funeral Home in Menomonie. Social distancing and face masks are required. A private funeral service will be held at Olson Funeral Home at 11:00 a.m. on Tuesday, February 2, 2021 with Pastor Sarah Miller officiating. Service will be live streamed at www.facebook.com/OlsonFunerals. Burial will be in Evergreen Cemetery in Menomonie. A special thanks to Dr. Nathan Rich and the wonderful nursing staff of Red Cedar Medical Center. In lieu of flowers, Janet requested that memorials be given to Our Saviors Lutheran Church, the Salvation Army, and the Humane Society.

Janet (Barnes) Wendt, age 91, passed away on January 27, 2021. Janet was born on March 20, 1929, early in the morning on a farm near Spring Valley WI to Charles Barnes and Esther (Bernard) Barnes. Because the doctor did not arrive in time for... View Obituary & Service Information

The family of Janet E. Wendt created this Life Tributes page to make it easy to share your memories.